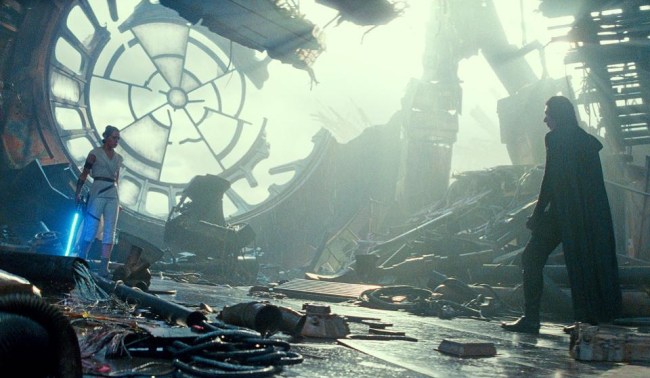 Ever since the release of Justice League in 2017, fans of the DC franchise have been calling on Warner Bros. to “release the Snyder Cut”.

As you may or may not know, the Snyder Cut is director Zack Snyder’s version of the film that is without the meddling of Joss Whedon (who directed the first Avengers), who took over directing the film following the tragic suicide death of Snyder’s 20-year-old daughter Autumn.

While Warner Bros. has yet to give fans what they want, in the years since, Snyder himself has fueled the fire, as he not only confirmed the existence of such a cut but has slowly but surely released tantalizing images from the project.

And now, seemingly taking inspiration from DC fans, Star Wars fans have united and gotten “Release the J.J. Cut” trending on Twitter in an effort to get Disney to release his true vision of the film.

so basically to sum things up the reylo kiss was fan service d*sney is racist and homophobic and doesnt give a single shit about star wars or its actual fans and there is a 3 hour cut out there that still exists and we are JUST SITTING HERE #ReleaseTheJJCut #ReleaseTheAbramsCut pic.twitter.com/Y0POqvlYtJ

The swell of online support for the “J.J. Cut” comes after Abrams’ longtime editor and collaborator Maryann Brand said that production of the film was “rushed.”

While appearing on “The Rough Cut” podcast (via The Playlist), “Rise of Skywalker” editor Maryann Brandon admitted the film’s production was rushed, which made for a challenging editing process.

“We were definitely still trying to figure out a lot of stuff,” Brandon said about the sped-up editing process. “It’s a struggle. It affected everything. About a third of the way through, [Lucasfilm president] Kathy [Kennedy] was like, ‘JJ has got to spend more time in the cutting room.’ And I knew that wasn’t going to happen. Not with the schedule that we were on. Not with what he was dealing with on a daily basis…he was just exhausted at the end of the day.” [via IndieWire]

Additionally, Brandon addressed what is perhaps the biggest criticism of the film: that it’s entirely made up of fan service.

As for the negative critical reception of “The Rise of Skywalker,” Brandon said, “In a time when the whole world is polarized, it should not be a film that is polarizing. Basically, the message of the film is, ‘Hey you know what? You can be bad and good can come into your life. And maybe if you’re open-minded to it, extraordinary things can change your mind. And you have to believe there’s always hope.’”

One of the biggest complaints thrown at “Rise of Skywalker” is that the movie is pure fan service, which is not a claim Brandon will try to fight. “Look, sure, it’s fan service,” the editor said, “[but] if you didn’t service the fans, it would be, ‘Oh, he didn’t go along with the history of ‘Star Wars’ and what it all means.’” [via IndieWire]

Given the Disney is a borderline monopolistic entity, it’s almost guaranteed that fans will never get a sniff of the said “J.J. Cut”, as Disney has literally no reason to admit to fans that they made a mistake because they know those same fans will still be future consumers of their content no matter what happens.