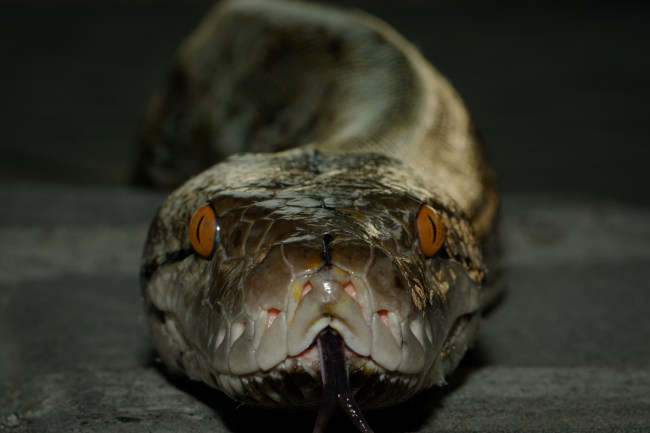 As we all know by now, Australia is the land of nopes and the country of 1,000 creatures that can kill you. Aussies seem to have a grip on controlling their fears because they are so used to being in constant danger of a place that always wants to end your days. One Australian young reporter showed bravery all in the name of journalism.

Australia’s Nine Network reporter Sarah Cawte went to do a report about “snake safety,” yet coincidentally it didn’t look safe whatsoever. The snake was placed on Sarah’s shoulder. That’s a nope.

The irate reptile did not appreciate a microphone being shoved near its face. Whether it was camera shy or chose not to give a comment, the snake decided its enemy was the mic. That’s a clear indication that the snake segment is over.

Cawte told the Australian morning talk show Today that she was “just there to shoot a couple of shots for this package about snake safety” and that she had “psyched herself up” to have a snake draped over her shoulders. Time to do a news report about a local cat fashion show.

The snake launched its head three times and struck the mic with its fangs.

“My cameraman and this snake handler just stood there, and they thought it was hilarious.”

The snake handler giggled as he told Sarah not to worry, and that the snake was just attacking the mic because it was in its face. Easier said than done.

Despite the snake lashing out, Sarah Cawte was the consummate professional and continued her newscast.

“While they might not be everyone’s cup of tea, most of the time snakes are more scared of you than you are of them,” she said moments after the snake lashed out.

“It just decided to take to the microphone, and I was just so scared because my hand was so close to where it was biting,” Sarah said. “It was very scary!”

“As soon as that was done, I said to the snake handler, ‘Get it off me!’ because I didn’t want it on me any longer.” Sarah should have covered a news story about a squirrel named “Nutty” who can waterski instead of the snake safety segment.

Reporter @sarahcawte has had a day at the office she will never forget after coming face to face with a slippery situation. #9News pic.twitter.com/igaPPH4tdY