Ric Flair Reveals New ‘Nature Boy’ Adidas Sneakers And, Woooooo, These Are Definitely Made For Styling And Profiling 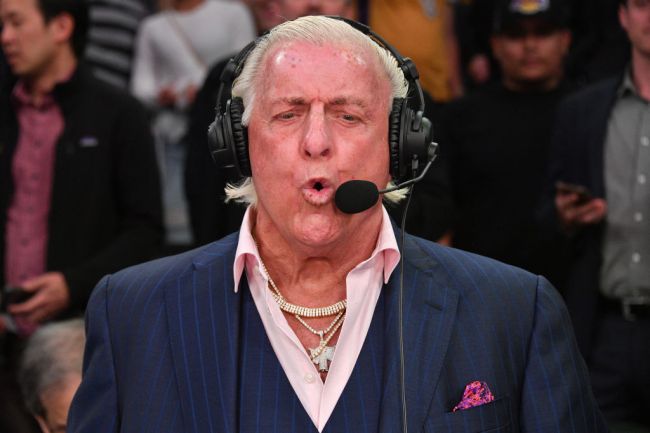 Last year, Ric Flair revealed to TMZ Sports that he’d inked a deal with adidas to collaborate on sneakers, clothing, and other random stuff.

Flair stated, “Ready for the good news? Adidas thinks I’m ‘The Man.’ I signed a deal with them, and we’re fixin’ to make Nike the second brand, OK? It’s not gonna be Air Jordan anymore, it’s gonna be Air Flair, and I can’t jump. It’s gonna be Adidas, wooo!”

Well, “The Nature Boy” revealed his first pair of adidas kicks to the world and just like the original NWA world title belt, the sneakers look like 10 pounds of gold.

The sneakers are white with metallic gold very much resemble some of Flair’s classic robes or the big gold belt Flair made famous.

Thank You Adidas For The Opportunity To Show The World That Stylin’ And Profilin’ With Naitch And Dame Is Even Cooler Than Being Like Mike! WOOOOO! COMING SOON!!! @damianlillard @adidas

“Thank You Adidas For The Opportunity To Show The World That Stylin’ And Profilin’ With Naitch And Dame Is Even Cooler Than Being Like Mike! WOOOOO! COMING SOON!!!”

While the sneakers aren’t bad, I’m hoping for an entire line of Ric Flair-inspired clothing and accessories.