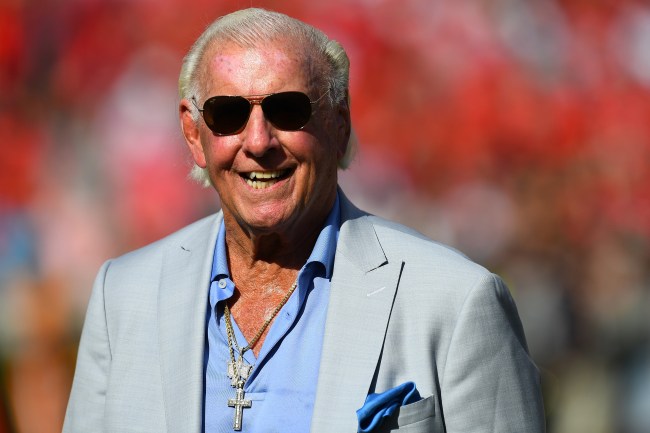 Is there anyone in the world who can bring all walks of life together in one place quite like The Nature Boy?

Ric Flair walked into the 1818 Club in Duluth, Georgia expecting a quiet dinner with his wife for his 70th birthday. When he walked through the doors, he was greeted with a barrage of “Woos!” and a room full of stars eager to attach themselves to the Hall of Famer.

Via The Los Angles Times:

I could watch this clip of Ric Flair walking through the doors to his 70th birthday party, failing to fight back tears. Mind you, the 70th birthday milestone comes just a year after Flair was hospitalized for serious health issues and at one point, given just a 20 percent chance of surviving.

Arash Markazi of the LA Times attended the event and reported that Flair “seemingly had a drinking story with every athlete at the party.” He reminded Charles Barkley that the two closed down a bar in New Orleans during NBA All-Star weekend. He recalled a night at the Renaissance Hotel bar in Atlanta with Holyfield when they were both world champions. He admitted to making some bad decisions with Dennis Rodman in South Beach.

Markazi also captured some awesome photos and videos from the event.

I thought Ric was going to die two years ago when he was in intensive care in Atlanta. We’re celebrating his 70th birthday tonight in Atlanta. pic.twitter.com/MtYR3ZRI1u

Watching Ric vs. Ricky with Ric and Ricky. The 8-year old me is losing his mind right now. pic.twitter.com/fOSKOoM3AS

My childhood on one table. pic.twitter.com/qnVzNZUZd9

Catching up with Dennis Rodman. The last time I saw him was 20 years ago at the Bash at the Beach in San Diego. pic.twitter.com/lnRyW1CgCI

Todd Gurley and Ric Flair in the ATL. pic.twitter.com/LwurNNvAiV

Who wants a piece? pic.twitter.com/lJQcKbhHm9

Flair ended his toast by thanking all of the people in attendance:

“I can’t even begin to tell you what it means to see everybody here tonight,” Flair said. “To end up with so many friends at this age. … I’m supposed to be long gone. I remember being out with Angelo Mosca, a Canadian wrestler, one night when I was younger and he told me, ‘If you live to be 30, you’ll be overstaying your welcome.’ True story and here I am.”