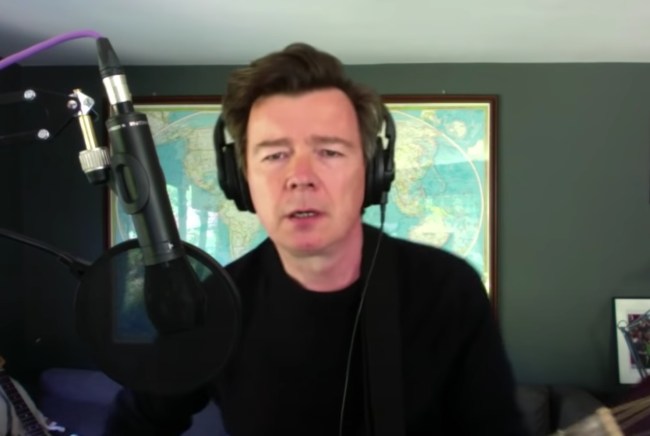 I was 97% certain this was going to be a ‘Rickroll’. I saw Rick Astley’s name trending and thought ‘yup, 100% this is going to be a Rickroll and not an actual acoustic cover of ‘Everlong’ by The Foo Fighters but that 3% of uncertainty made me click ‘play’ and I’m glad I did because this as a great way to start the day.

Rick Astley, real name Richard Paul Astley, took his 1987 single ‘Never Gonna Give You Up’ to #1 on the charts in 25 countries and by 1993 he had sold 40 million records worldwide, back when musicians actually made money off of album sales. Then, uh, he didn’t do a whole lot until the Internet bought him back in 2007.

It was around 2007 that Rickrolling took off on the Internet, the act of sending someone a video and getting them to unknowingly click on Rick Astley’s ‘Never Gonna Give You Up’ music video. Since the music video was uploaded to his official channel on YouTube in 2009 it has racked up 706,882,289 views and counting.

Here he covers the Foo Fighters in a video people are now calling ‘Rick-Grohling’ which probably won’t catch on but it’ll be great if it does.

Even when I was in Mexico a few years ago and drove past a billboard advertising a Rick Astley NYE concert it didn’t occur to me that Rick Astley has other tricks than his one-hit-wonder song. I was wrong, he’s talented. Millions and millions of people already knew this. I did not. I just assumed he was a one-trick pony and I feel the need to apologize to Rick for that.

I couldn’t let you go without at least including the original video, right?