Rick Moranis Sucker Punched In NYC, Further Proving Our Simulation Of Hell Is Entering Its Endgame 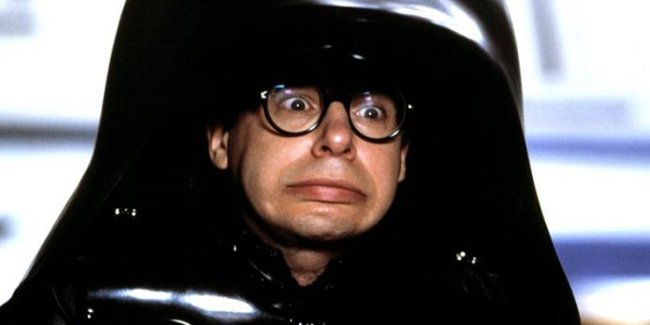 This is not funny, but I’m laughing anyway. You’d be surprised how often people laugh when they’re in uncomfortable situations that call for literally any other emotion other than the primal expression humor. I’ve heard of people who laugh at funerals. “Laugh the pain away,” as it were. Similar to watching my New York Jets lose to a third-string-quarterbacked Broncos or finding out that the President of the United States of America has contracted coronavirus, sometimes you simply have to throw your hands up and chuckle at the absolutely shambolic state of your situation. How else do you react to one of America’s Dads getting coldcocked at sunrise on the streets of Manhattan?

I mean, talk about laying it on thick, am I right? Rick Moranis — the perpetually Dad-looking actor from 80s comedy classics such as Ghostbusters, Spaceballs, and Hunny, I Shrunk The Kids — was assaulted in New York City on Thursday morning, only further reminding us that our reality (which, let’s be honest, is a kind word for whatever it is that we’re existing in) is entering its final act. If Rick Moranis ain’t safe in these simulated streets, none of us are.

“Oh, you didn’t think we’re living in some sort of hyper-realistic simulation of hell? Well, allow me to retort?” said Satan, channeling his inner Jules Winnfield, as he fiddled with the simulations dials and sent for Rick Moranis’ head.

🚨WANTED for ASSAULT: On 10/1, at 7:24 AM, a 67-year-old male victim was walking southbound on Central Park West in the vicinity of West 70th Street, when an unidentified male struck him in the head with a closed fist, knocking him to the ground. Have info? Call/DM @NYPDTips pic.twitter.com/ZvSUPjtVdp

The 67-year-old actor and comedian was reportedly walking when the suspect punched him in the head, knocking Moranis to the ground. According to the NYPD, Moranis took himself to the hospital before later reporting the incident to police at the 20th Precinct.

The NYPD says the attacked occurred on Central Park West near W 70th Street around 7:30 a.m. Thursday. Video of the assault was tweeted by police and includes a look at the suspect, dressed in black and wearing an “I Love New York” hoodie. The NYPD called the assault “random” and “unprovoked.” [via NBC New York]

Don’t get me wrong, sucker-punching anyone — let alone a 67-year-old man — is absolute cowardice, but there’s just something diabolically evil about assaulting a man who essentially brought joy to two generations of people (both Gen X and Millenials: sorry, Gen Z, my man Rick said fuck all this and bounced from Hollywood to raise his kids before you could be #blessed with his comedic gifts).

Get well soon, Rick. And you — yes, you dear reader — if you haven’t seen Spaceballs, do yourself a favor and check this Mel Brooks cult classic off your list. After all, you only have so much time: the simulation is entering its endgame.