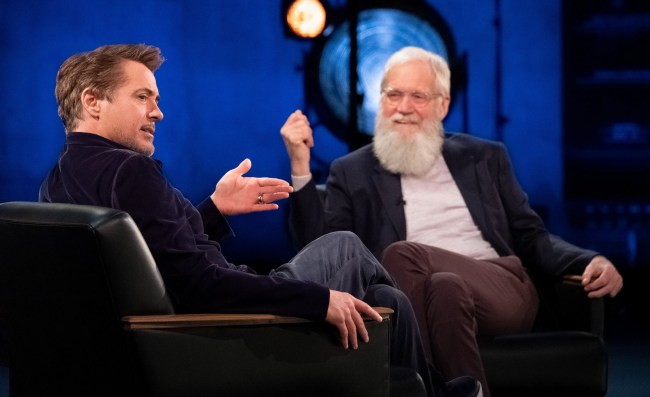 As we know now, because it became readily apparent throughout the many Marvel films in which he appeared, the Iron Man helmet worn by Robert Downey Jr. in the Avengers movies was created using computer-generated imagery (CGI).

However, it wasn’t always that way.

During his appearance on an upcoming episode of My Next Guests Needs No Introduction With David Letterman, Downey revealed that the very first Iron Man mask was actually real. And it was not spectactular.

“Excellent question,” Downey replied. “Initially, everything was really there. They wanted to spend as little as they could on CG replacement, so I remember this helmet went on, and there’d be a shot, and I’d be in this whole suit, and they’d say, ‘Alright, Robert, it’s like you landed on the roof, so when we say action, just go like that, like you just landed, and then start moving forward.’

“So I put this helmet on, and it slammed closed, and I couldn’t see anything, and then these LED lights went on and it was like The Manchurian Candidate… I was absolutely blinded.

“By the time we were doing the last Avengers, they’d just be like, ‘Hey, Robert, would you mind putting on the…’ ‘Helmet?! No! Yes? No. Put two dots here (points at his forehead) and you can paint it in later.'”