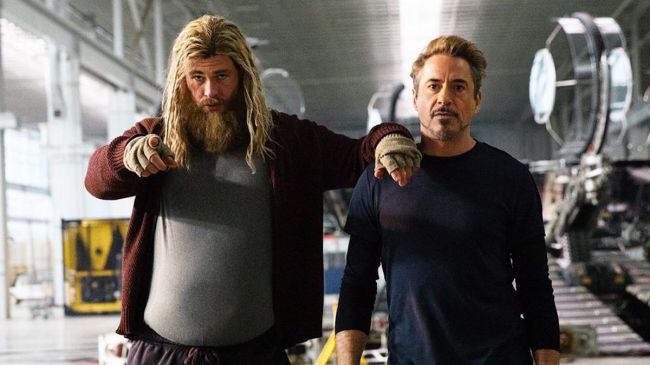 Based on appearance alone, the character of “Fat Thor” in Avengers: Endgame could be seen as something of a joke. Dig a bit deeper, though, and you’ll find that it’s actually quite a deft examination of grief, guilt, and depression, especially as far as comic book movies are concerned.

During a recent interview on the Happy Sad Confused podcast, Chris Hemsworth discussed performing dramatic scenes as Fat Thor and detailed one specific memory of improvising a line in Avengers: Endgame that earned him the praise of Robert Downey Jr, a.k.a the “godfather” of the Marvel Cinematic Universe.

In fact, I’ve actually long argued that Hemsworth’s Thor is the dramatic heartbreak of Avengers: Infinity War and Avengers: Endgame, which is pretty remarkable considering he was sharing the screen with the likes of Robert Downey Jr’s Iron Man and Chris Evans’ Captain America, both of whom were likely appearing in the franchise for the final time (for now, at least).

“You’re always like, ‘Is this going to work,’ you know? I remember that scene [in Avengers: Endgame] where I start breaking down, pitching everyone the mission, and talking about my family, and who died, and so on… just little moments like that in your career where just everything lines up, and there was a bit of improv, and so on. And I think it ended with me saying, ‘I want a Bloody Mary,’ to Downey, and he said to me, ‘How do you feel?’ I said, ‘Yeah, I forgot, it’s pretty special.’”

Hemsworth continued, “He goes, ‘Every now and then, a few times in your career, you have little moments where you hit the bullseye and it’s like you’re in the sweet spot.’ And he said, ‘Oh, enjoy it.’ And I really appreciated that, because I definitely felt something special about that moment, but who am I to judge, you know? And so, to have the godfather lean over and say, ‘Well done, son…’” [via Happy Sad Confused]

Here’s the moment that Hemsworth is referencing, which sees Thor explain his idea for getting the Infinity Stones back from various points in the Marvel Cinematic Universe timeline:

While Hemsworth referenced Downey Jr as being the godfather of the MCU, it can actually be argued that Thor now holds claim to that title as he recently became the first character to feature in a fourth solo film with the release of Thor: Love and Thunder.

Unfortunately for fans of Hemsworth and the God of Thunder, though, it sounds as though his experience working on Love and Thunder burnt him out a bit as he recently said the character would need to be a “drastically different version for his own sanity.”