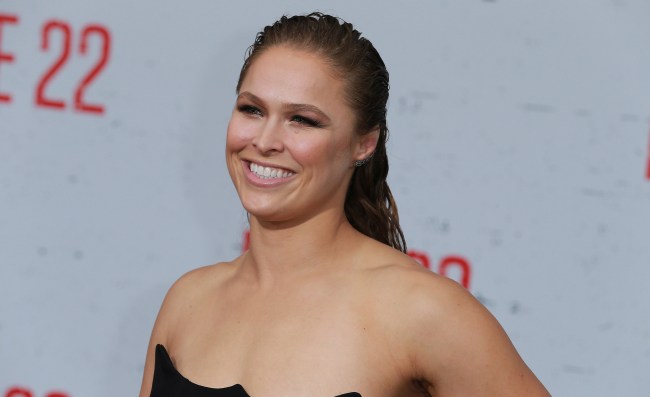 Ronda Rousey, who is on a sabbatical from the WWE for her #impregnationvacation, recently landed herself a recurring role for season 3 of the Fox drama 9-1-1.

Rousey will be playing firefighter Lena Bosko, “a stoic and fearless member of the Los Angeles Fire Department Station 136 who leaps into action to save lives when a disaster hits.”

Fearless is also a pretty appropriate role for Ronda considering that while filming this past week in Mexico she broke her finger slamming a door it barely registered.

“She was a little over-exuberant and slammed the door on her fingers,” a source told TMZ.

After slamming the door on her fingers, Rousey reportedly didn’t even wince and stayed in character to finish the scene.

Unfortunately, especially for those of you about to look at the photo below, Rousey damn near chopped her middle finger in half.

(Seriously, I am warning you now, you really don’t want to see the photo of Rousey’s finger. Stop scrolling!)

The damage to her finger turned out to be so bad that it had to be repaired with a “bolt and screws.” She also fractured the tip of her ring finger just for good measure.

So, if you really want to see Rousey’s severed finger, just keep on scrolling down.

TMZ also reports that Rousey will be discussing the injury on her website at some point soon, so come on back and hopefully we’ll have a video to share!

“So the word is out I nearly lost my finger shooting @911onfox,” Rousey just wrote on Instagram. “Freak accident, first take of the day a boat door fell on my hand, I thought I just jammed my fingers so I finished the take before looking (I know it sounds crazy, but I’m used to live audiences and never showing pain unless I’m supposed to) after a break in the action I told our director the situation and was rushed via ambulance to the hospital where they promptly reattached my bone and tendon with a plate and screws. I returned to filming the next day and finished my scenes before returning home to recover. Modern medicine amazes me, I already had 50% range of motion back in 3 days. There’s so much more than I can write here, stayed tuned via @rondarouseydotcom for the full story. And of course tune in to see how well I can act like my finger didn’t just fall off in this upcoming season of @911onfox