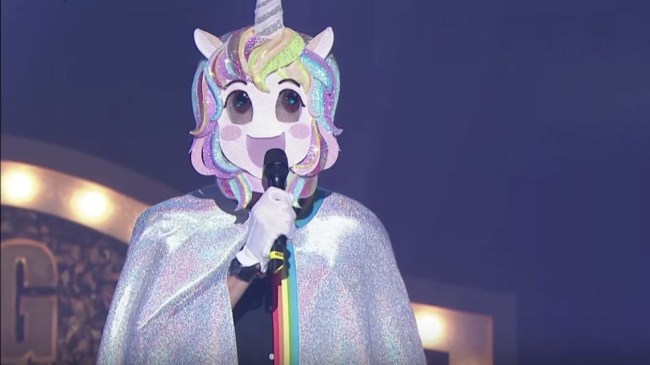 This Mad Libs-like headline was not the work of manatees with idea balls, but is an actual thing that really happened. Ryan Reynolds made a surprise appearance on a Korean singing competition show to promote Deadpool 2 and he performed a cover of “Tomorrow” from Annie while wearing a colorful unicorn costume. I love South Korea.

Over the weekend, Reynolds appeared on the King of Mask Singer Korean TV show. The Hollywood actor who plays Deadpool belted out a very impressive cover of the Annie theme song while wearing a unicorn mask and a sparkly cape. The crowd erupted when Reynolds revealed his identity by removing his wonderful unicorn mask. Reynolds then apologized for his singing performance, but he definitely shouldn’t because it was rather terrific considering he is an actor and not John Legend.

You may recall that this isn’t the first time that Reynolds has sang “Tomorrow” from the Broadway musical Annie. Only a few weeks ago the Deadpool 2 star was dressed in his Merc with a Mouth suit when he serenaded Hugh Jackman, who was attempting send out a happy birthday video to a friend. “When you’re trying to record a heartfelt birthday message …. but are interrupted by the least greatest showman,” Jackman captioned the tweet.

When you’re trying to record a heartfelt birthday message …. but are interrupted by the least greatest showman. @VancityReynolds pic.twitter.com/RwlE4IXFX1

Deadpool 2 smashes into theaters THIS Thursday, May 18th.