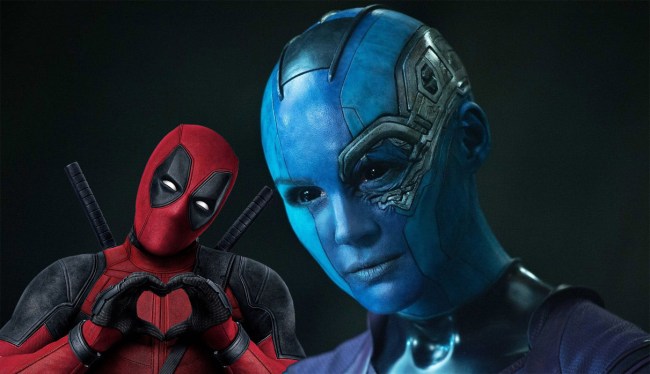 Deadpool star Ryan Reynolds is playing Karen Gillan of the Guardians of the Galaxy this week in fantasy football and the trash talk between the two of them has been top-notch.

Each participant is playing for a charity of their choice and the trash talk so far has been pretty solid.

On a scale from 1 to smoking my children’s pajamas, how desperate are you to win this thing? #agbosuperheroleague https://t.co/OJGBuF0zj5

This week, however, things took a turn for the weird after Reynolds posted a video talking smack about Gillan, his opponent this week.

“So here’s the thing,” Reynolds said after announcing which charity he is playing for. “Full disclosure. According to Joe and Anthony Russo, I’m supposed to create a trash-talking video in order to be in this league, and I’m not super comfortable with trash talk because I’m Canadian. I try and maintain a level of politeness, but anyway my opponent this week is Karen Gillan, and she’s like, nice. You know I thought I was going to get like Chris Pratt or RDJ or Anthony Mackie or Chris Evans, f**k that guy, but no, I got Karen, and so I sort of feel like I’m going to tread a little bit more lightly. I’m going to save the really intense hard stuff for next week maybe, but in the meantime, I’m going to trash talk Karen Gillan, but nicely so here goes.”

What follows is basically a series of bleeps censoring most of that he is saying and closes with, “In summary, Karen, step off, step back, and crawl back into whatever (bleep) you crawled out of. I feel really good about this!”

Gillan then responded by posting a video of herself going into a book store to buy a Deadpool toy so she can light it on fire.

One problem. She bought a Spider-Man toy, which she eventually realizes after she sets it ablaze. She ends up saving the day though by adding Tom Holland’s famous lines from Infinity War, “I don’t want to go. I don’t want to go.”

Of course, Reynolds couldn’t help himself and had to issue a response to Gillan’s video, saying she owed Tom Holland an apology.

I think we all owe @TomHolland1996 a sincere and unblinking apology. https://t.co/POqPUNR39K

So Gillan apologized and in the process took one more shot at Reynolds.

Regardless of who wins this week’s matchup between Gillan and Reynolds, I think it’s all of us that are the real winners here.