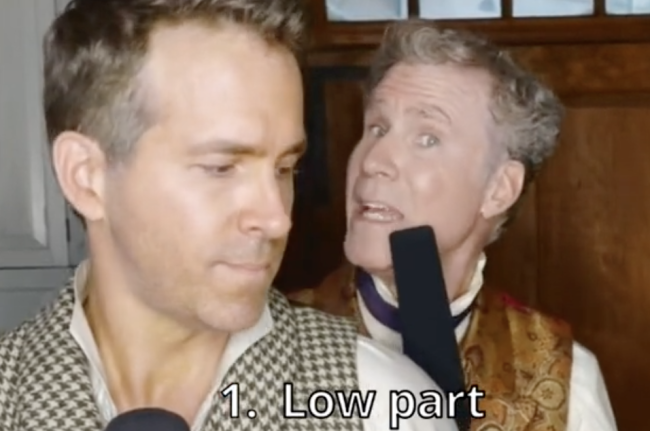 Will Ferrell just couldn’t let Ryan Reynolds have his moment.

Reynolds is currently filming a Christmas musical with Ferrell in Boston and hopped on TikTok’s ‘Grace Kelly’ trend to show off his vocals. The song, released by British singer Mika in 2007, falls into the glam rock/pop rock category.

TikTok took over the song, and the viral trend involves users performing the famous lyrics from the chorus:

Some of the videos are done as a solo singer, covering all parts of the harmony and stacking them on top of each other. Others are done in a group, with different individuals singing each part.

Reynolds’ rendition, however, is a combination of both approaches. It begins as a solo performance through the low part, less low part and one note part.

And then, as Reynolds goes to sing the high harmony and VERY high harmony, Ferrell crashes the performance with his falsetto. While Reynolds looks confused for a moment, he embraces his co-star and holds down the bass line.

While it makes for a hilarious video, it’s also very impressive.

Late to the Grace Kelly trend but way early for our movie musical. I ❤️ duets. (And Mika)

Ferrell and Reynolds are currently working on the movie Spirited. The musical’ set to be a modern, musical interpretation of A Christmas Carol and both actors were wearing their Dickensian suits during the ‘Grace Kelly’ video.