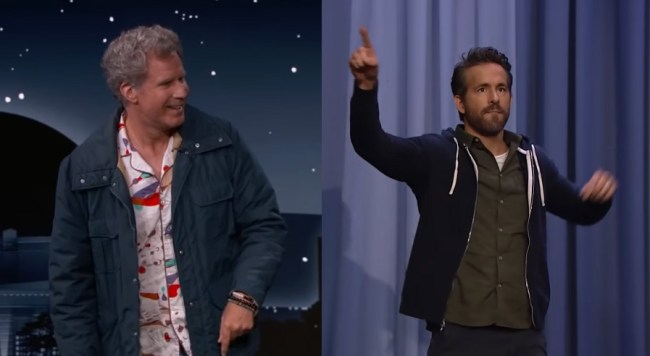 Wednesday night, Ryan Reynolds was supposed to appear on Jimmy Kimmel Live to talk about his new movie Red Notice. Meanwhile, over on The Tonight Show Starring Jimmy Fallon, Will Ferrell was supposed to be interviewed and discuss his new show The Shrink Next Door.

Instead, Will Ferrell showed up on Jimmy Kimmel Live to talk about Red Notice, while Ryan Reynolds tried to discuss The Shrink Next Door on The Tonight Show Starring Jimmy Fallon.

Not at all coincidentally, both Ferrell and Reynolds star together in an upcoming holiday movie called Spirited.

After being introduced to the audience by Jimmy Kimmel as Ryan Reynolds, Ferrell sat down and explained, “Ryan couldn’t make it. I got a text from him that said he was running late, which usually means he’s not gonna show up. He just asked if I would fill in and I just rolled down the hill because I live up near the Magic Castle. I live at the Magic Castle, you know that. I’ve always kept a suite of rooms there.”

“Are you in Red Notice?” Kimmell asked.

Will then asks Jimmy, since he has actually seen the movie, what it is about.

After watching a clip, which, of course, Ferrell hasn’t seen yet, Kimmell proceeds to ask Will the questions he had planned to ask Ryan Reynolds, including one asking how Reynolds’ wife Blake Lively is doing. The interview pretty much went off the rails from there.

Over on The Tonight Show, Jimmy Fallon was just as surprised to see Ryan Reynolds show up instead of Will Ferrell.

“I just put the kids to bed,” Reynolds explained. “I was walking the dog around the block, Will called, said he was running a little late, asked me if I’d jump in for him, and I said, Anything for you, Will.'”

Reynolds went on to, with more than a hint of irony, say, “I’m just as disgusted as you are with these plastic, playboy Hollywood prima donnas that think they can just have a talk show appearance and then just not show up. It’s… Will Ferrell, too, he loves late night talk shows, he’s a late night talk show slut, yet he just doesn’t even… who blows this off?”

Fallon, after some “unwanted” sex talk about Reynolds’ wife Blake Lively, then proceeds to ask Ryan the questions he had prepared for Will Ferrell, including a discussion about Ferrell’s new show The Shrink Next Door, also starring Paul Rudd.

Related: Which Is Funnier? Paul Rudd’s Reaction To Being Named ‘Sexiest Man Alive’ Or Ryan Reynolds’ Reaction To It?

“I’m happy for Paul because he’s possibly the nicest human being in all of show business, he’s aging backwards because of his contract with Satan… or he only drinks breast milk from a blue whale or something… the point is he does something weird.”

After that bizarre intro, Reynolds goes on to describe The Shrink Next Door as “an Ant-Man sequel.”

“It’s in the Ant-Man universe,” he continued. “It’s Ant-Man adjacent. He’s a shrink. He doesn’t shrink his body per se, but he’s a psychiatrist so he does like psychiatristy things.”

As Fallon tries to explain that the show has nothing to with Ant-Man, Reynolds tells him, “It’s Marvel Phase 16, which everybody is saying is way more relatable.”

Reynolds then goes on to explain the plot of the show which sounds suspiciously similar to the movie Honey, I Shrunk the Kids.