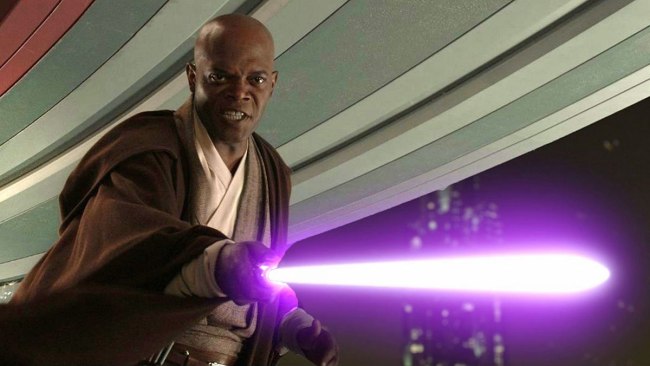 With the Star Wars franchise now seemingly focused on character-driven TV series as opposed to tentpole films, the opportunity for actors from the franchise’s past to return to their iconic roles is greater than ever.

During a recent interview on the Happy Sad Confused podcast, 73-year-old acting titan Samuel L. Jackson confirmed he’d like to be one of those returning actors, as he revealed that he’s “ready” to reprise his role as Mace Windu, the purple lightsaber-wielding Jedi who featured in George Lucas’ prequel trilogy.

“He’s [Mace Windu] alive somewhere. That’s the same way I think about the dude from Jurassic Park — he’s somewhere riding around on velociraptors with one arm,” Jackson said on Happy Sad Confused.

“There’s a huge history of people with one hand returning in Star Wars. The only person I’ve ever said that to, about coming back, was Bryce Dallas Howard, ’cause I just did a movie with her and she directs episodes of The Mandalorian. I said, ‘So you think you might be able to hook a brother up? I mean, you like me, right?’ She’s like, ‘I love you, you’re amazing!’ ‘So put me back in! Put me in coach, I’m ready! I’ll learn to lightsaber left-handed. Come on.”

Where the hell is Mace Windu?! Me & @SamuelLJackson want to know. @BryceDHoward, help us out! Put him in the game! pic.twitter.com/WfkVvgah8B

If you remember, Jackson’s Windu was last seen having his arm chopped off by Emperor Palpatine before he was thrown from the top of a massive skyscraper on Coruscant, leading many fans to presume that the character had died.

Should Jackson return as Mace Windu, he would be one of many actors from the prequel trilogy reprising their roles. Temura Morrison, who featured as Jango Fett in the prequels, returned as Boba Fett in Disney+’s The Book of Boba Fett, while both Ewan McGregor’s Obi-Wan and Hayden Christensen’s Darth Vader will feature in the upcoming Obi-Wan Kenobi series.

Fans would certainly welcome the return of Jackson’s Jedi to the Star Wars franchise, as Mace Windu was one of the consensus fan-favorite aspects of the much-maligned prequel trilogy.

As for what Samuel L. has been up to lately, he can most recently be seen starring in the AppleTV+ miniseries The Last Days of Ptolemy Grey. Later this year, he’s also set to star in the Disney+ Marvel series Secret Invasion and Matthew Vaughn’s franchise-hopeful Argylle alongside the likes of Henry Cavill, Sam Rockwell, Bryan Cranston, Bryce Dallas Howard, John Cena, Catherine O’Hara, Dua Lipa, Ariana DeBose, and Rob Delaney.

RELATED: Samuel L. Jackson Is None Too Thrilled That Jonah Hill Holds The Record For Most Curse Words In Movie History