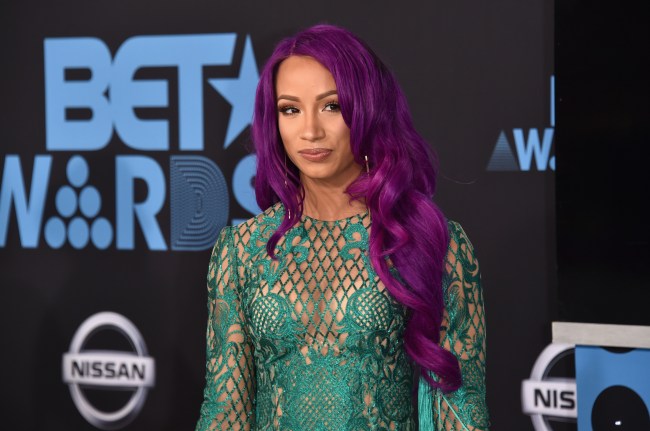 Look, I don’t know fuck all about wrestling. I used to back in the Attitude Era when GOATS like The Rock and Stone Cold and the Undertaker were running around raising hell, but that was basically two decades ago. It’s been a longgg time since the days of Mankind shoving his dirty sock down people’s throats.

That said — I do know who Sasha Banks is! How? Why? Well, perhaps you can take a guess.

But I digress! While I’m sure Sasha is a fine wrestling talent, we’re not here to talk about her WWE career (which, as far as I can tell, has been wildly successful thus far). We’re here to talk about the rumors that she’s joined the cast of The Mandalorian for season two.

Rumors are now floating around that WWE superstar Sasha Banks will be part of Season 2. The potentially big reveal (if proven true) was put out there by the Mat Men Pro Wrestling Podcast.

The Sasha Banks news was coupled with some other would-be factoids about the upcoming WrestleMania 36, and as noted in the post, it hasn’t been fully confirmed just yet.

That said, another tweet also claims the source told them Sasha Banks has already finished filming her Season 2 scenes. So if it turns out that she actually is in the show, her role probably isn’t going to overshadow Mando’s or any other main characters.

Here is another interesting tidbit we were told by the same person but I can not 100% confirm it.

Sasha Banks will be in season 2 of The Mandalorian #Mandalorian #SashaBanks pic.twitter.com/3KUhuRyxEd

Long story short — I’m all for it. While her line delivery left something to be desired, I enjoyed Gina Carano’s Cara Dune character in the first season, so there’s no reason to believe that Disney won’t be able to pull off that same sort of effective stunt casting for season two.

The second season of ‘The Mandalorian’ will premiere on Disney+ in October. All eight episodes of the first season are currently streaming.