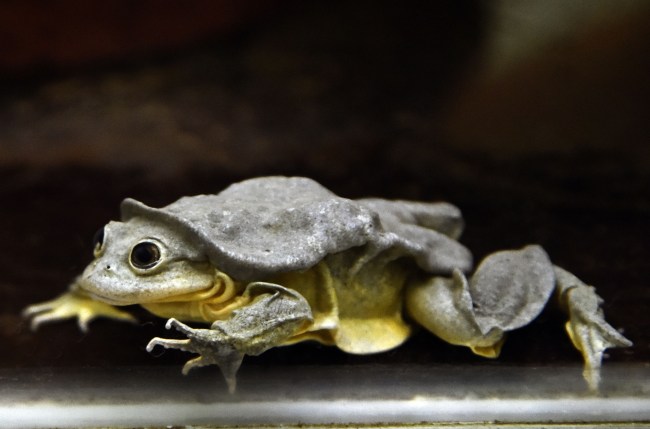 If we band together as a global community to accomplish one goal this year it must be saving the endangered Scrotum Frog of Lake Titicaca. Not because that’s the greatest name in the history of herpetology, and not because the frog is aptly named for its folds of skin that resemble some old dude’s junk you accidentally saw while walking through the locker room at the YMCA, but mostly because we’ve collectively failed to accomplish any other global goals this year and this ‘sack frog might be our last chance to do something great.

The Scrotum Frog is native to Lake Titicaca which straddles the border between Peru and Bolivia. It is the ‘world’s highest navigable body of water’ and one of South America’s largest and most famous lakes. It’s also home to the endangered Scrotum Frog who faces extinction due to loss of habitat, poaching, and trout munching on the Scrotum Frog tadpoles.

The Scrotum Frog, scientific name Telmatobius culeus, is the largest ‘entirely aquatic frog’ in the world and it’s capable of growing up to 8-inches long, not that 8-inches is anything special and something to brag about. Some frogs are perfectly fine at just 4-inches. There’s no need to rub it in.

According to a report on CNN, scientists are sounding the alarms after an estimated 90% of the Scrotum Frog population disappeared on the Bolivian side of the lake as conditions have worsened over the years. Previously, a study between 1994 and 2004 found 80% of Scrotum Frogs had been wiped out and this latest revelation is evidence that things have only gotten worse. 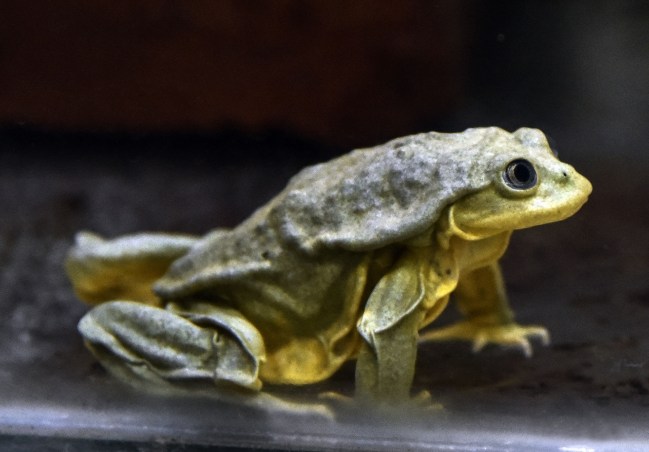 Scrotum Frog Lake Titicaca Water Frog, A Titicaca water frog (Telmatobius culeus), native to the Titicaca lake is pictured in Cochabamba, Bolivia on August 07, 2018. - This endangered frog distinctive for its saggy-skinned appearance, is the biggest frog in the continent and has adapted to the high-altitude habitat (3,810 meters) of the Titicaca lake. (Photo by AIZAR RALDES / AFP) (Photo credit should read AIZAR RALDES/AFP via Getty Images)

Scientists have a plan to save the Scrotum Frog from extinction, here’s the rundown from CNN:

The project, announced on Sunday by Bolivia’s Natural History Museum, will allow researchers to study the frogs’ underwater habitats, and evaluate their population status and genetics.
The researchers’ data will help authorities to prioritize conservation areas under threat and create conservation policy, said a statement on the region’s transboundary Integrated Water Resources Management website. The project is backed by the Peruvian and Bolivian governments, who have “the same mission: promote the conservation of the Lake Titicaca Giant Frog,” said the statement. It’s also supported by the United Nations Development Program and the Global Environment Facility.

The frogs are an ecologically important species in Lake Titicaca, also called an “indicator species,” meaning it helps authorities measure the health of the ecosystem, and of other species around it.
However, there aren’t enough consistent surveys around the lake, and many surveys use different techniques at different times of the year — meaning it’s difficult to accurately measure population sizes and the rate of decline. Due to this data uncertainty, the IUCN revised the species’ threat level to from “critically endangered” to “endangered” in 2019, calling it a “precautionary approach.” (via CNN)

If trout feeding in Lake Titicaca really are ravaging these Scrotum Frogs then my first suggestion is we ramp up trout tourism there ASAP. Start organizing expensive trout fishing expeditions to Lake Titicaca where anglers can also feast their eyes on the Scrotum Frog. Make visitors pay a large fee for fishing in the area and then directly repurpose those funds back into conservation and saving the gorgeous Scrotum Frog.

I’d personally LOVE to travel to South America to go fishing for trout and a chance to see this Scrotum Frog in person. Toss in some additional days of eco-tourism and fishing and that actually sounds like my ideal vacation.

Back in 2016, 10,000 of these Scrotum Frogs died off suddenly and nobody knew why at the time. Later, sludge and runoff were found and pollution was determined to be the cause.

The hope is this new conservation project can start bolstering the numbers of these skinfold frogs and bring them back from the brink of extinction.

It’s time to hop to action here, folks. The time to act is now. We can sac up and save this magnificent creature from disappearing if we all channel our collective efforts into conservation. For most people that means nothing more than sharing this article and spreading awareness. Doing your part to spread the good word of the Scrotum Frog. That’s really all most of us can do right now, rase awareness.