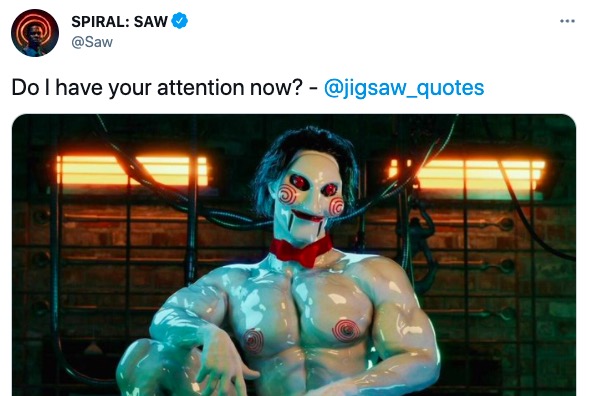 At this point in my internet life, there’s really nothing left that will surprise me. I’ve seen people become millionaires (like the Cash Me Ousside chick) and lose everything (like the hundreds, if not thousands, of people who have been canceled in recent years, deserved or not). I’ve seen marriages and break-ups, love stories and tales of revenge. I’ve seen official brand accounts like Steak-umm hilariously dunk on Neil deGrasse Tyson, and I’ve seen the likes of Burger King tweet that “women belong in the kitchen”. And those last two examples only just happened in the past few months!

Still, all that said, I’d be lying if I didn’t admit that I was taken aback by what the official Saw account pulled yesterday, just a week before the release of the next film in the franchise, Spiral. Folks, there’s being irreverent/intentionally edgy, and then there’s this: a horrifyingly shredded Billy the Puppet (that’s the character’s name, apparently), complete with spiral nipples and all. It just goes to show that you should never, under any circumstance, underestimate the internet, as it will also prove to be far crazier than your imagination can comprehend.

Despite the best efforts of the official Twitter to make me never want to lay my eyes on another piece of Saw content again, I’ll definitely be checking out Spiral when it hits theaters next week, as the film — by some miracle — actually looks pretty sweet. I mean, how can you pass up on Samuel L. Jackson asking “You wanna play games motherfucker?”

Spiral: From The Book of Saw — which is directed by longtime Saw franchise director Darren Lynn Bousman and stars Chris Rock and Samuel L. Jackson — will hit theaters in the United States on Thursday, May 13.