Which Of The Most Fearsome Sharks In Movie History Would Win In A Battle Royale? 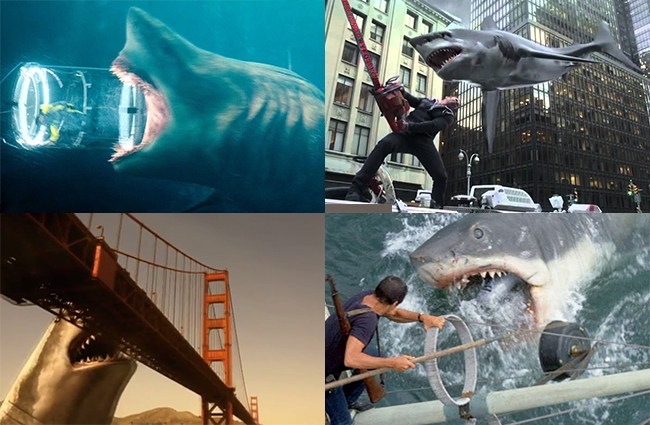 Hollywood has dreamed up some absolutely terrifying antagonists over the years, but as far as I’m concerned, serial killers and other murderous psychopaths have nothing on a force I think is far more formidable than any other: sharks.

Something about sharks taps into a primal fear many of us have about the ocean and what lurks beneath it. However, there are also less abstract reasons they’re capable of instilling as much terror as they do, like their multiple rows of constantly regenerating teeth and their stellar killing acumen. Take your pick.

After Jaws terrified the world and convinced a sizeable chunk of the population that sharks are evil and vindictive creatures by nature, the author of the book it was based on devoted much of his life trying to dispel that notion and anyone who’s a fan of Shark Week knows how misunderstood they are.

Unfortunately, their reputation as bloodthirsty killers hasn’t disappeared thanks in no small part to how they’re routinely portrayed in movies (which I’m convinced are partially funded by a collective of community pool owners trying to scare people away from the ocean).

However, not all of the sharks that grace our screens are created equal, so I decided to take a closer look at their various attributes and rank them to determine which one would reign supreme if they all gathered together for a battle royale.

Without further ado, let’s see which fish with a mouthful of bandsaws reigns supreme. 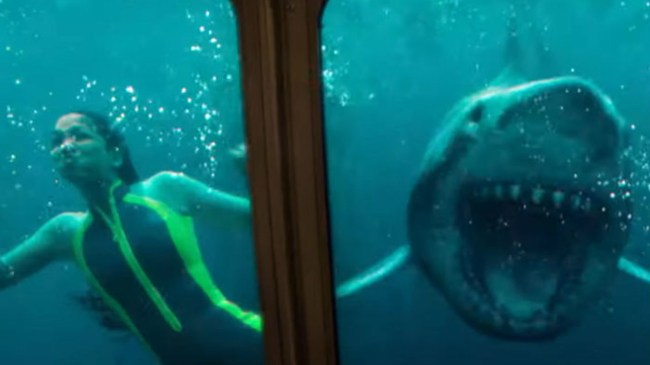 Now that we’re all on the same page, let’s get everyone acquainted with the plot of this movie. Two girls are trapped in a shark cage (you guessed it) 47 meters underwater. That would already be enough cause for a less-than-glowing Yelp review for the diving tour company, but there are also a bunch of great white sharks swimming around them, which makes any potential escape far more dangerous.

The premise of this one always freaked me out but the sharks never did because they’re not even the biggest threat to the protagonists of the film—lack of oxygen is. Yeah, they’re scary, but they can’t be high on the list if they’re topped by a dwindling O2 supply. 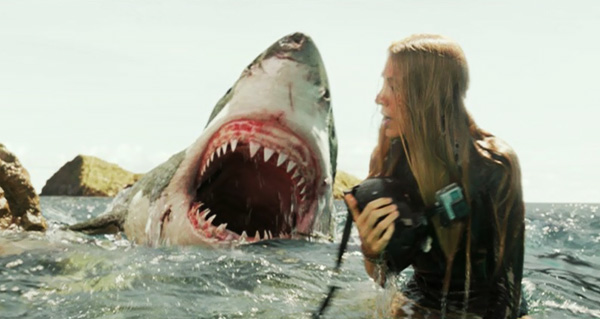 2016’s The Shallows had an interesting premise, but personally, I don’t even think of it as a shark movie but rather as a “Blake Lively sits on a rock for an hour-and-a-half” movie.

The shark itself is of the great white variety, which is the go-to choice when casting underwater predators. I understand why—I mean, it’s got the word “great” in the name— but I like an occasional bit of shark stunt casting.

Give me a little tiger shark action every once in a while. Switch it up with a bull shark. Maybe even a hammerhead, a shark so badass that it developed a head shaped like a weapon. The only thing crazier would be if a shark developed a head shaped like an Apache helicopter or something. That’d be wild (and given nature’s track record, I wouldn’t rule it out. Just give it several million years).

Anyway, The Shallows is scary enough to make me rule out surfing when during vacation in the foreseeable future but its shark is a bit run-of-the-mill. 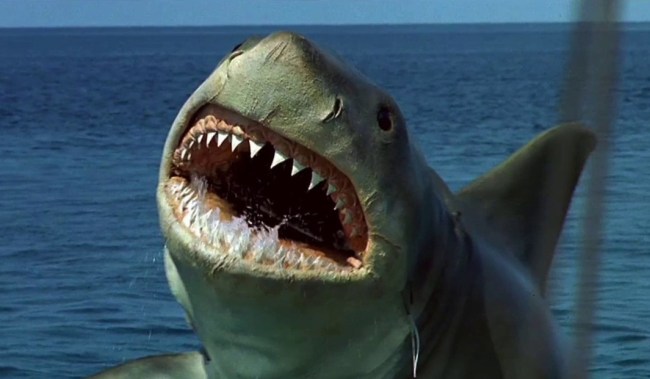 The sequel to the most iconic shark movie of all time (which will be discussed later) features yet another great white as the cartilaginous villain. Throughout the film, this particular shark does a lot to terrorize the poor folks of Amity Island, who just can’t seem to catch a break.

What makes this man-eater rank substantially lower than its predecessor? It’s all about its ultimate demise.

Now, because this is the internet, I feel obligated to issue a *SPOILER ALERT*, but come on, this movie is 40 years old. If you turn on AMC during just about any weekend during the summer, it’ll probably be on.

The climactic confrontation between the shark and Chief Martin Brody occurs on an island that houses an electrical relay station. It’s here where the shark’s undoing happens by acting on impulse instead of taking time to assess the situation. Sharks love to bite things and this one made the questionable decision to chomp down on a cable and subsequently electrocutes itself. It’s kind of a cool way to go out but seems like it could’ve been avoided if it had just exercised a little self-control for once. 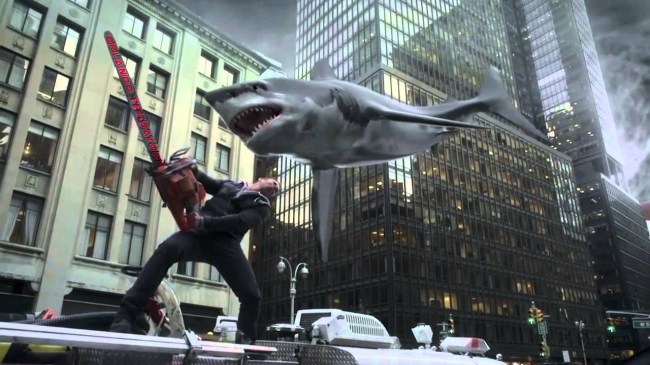 “Quantity over quality” seemed to be the credo when Sharknado was in production. There are what can only be described as an “assload” of sharks in this movie and the danger factor is upped thanks to all of the things in play.

The sharks that appear in the notoriously schlocky SyFy channel classic are vicious in their own right but the entire package is what makes the whole Sharknado situation so dangerous.

If you can’t tell by the title, the movie involves a giant weather system that scooped up a bunch of sharks and just started flinging them all over the place. In addition to possessing the teeth and less-than-jovial demeanor of most sharks, they’re also heavy as hell.

I’ve always heard how much damage a falling coconut can do (unless we’re playing by Gilligan’s Island rules, in which case getting plunked on the head by one cures amnesia). Now imagine walking down the street and getting waffled by an airborne shark. It’d be like having a piano or an ACME brand anvil dropped on you.

However, that wouldn’t come in very handy when it comes to fighting an aquatic battle, so fifth place it is. 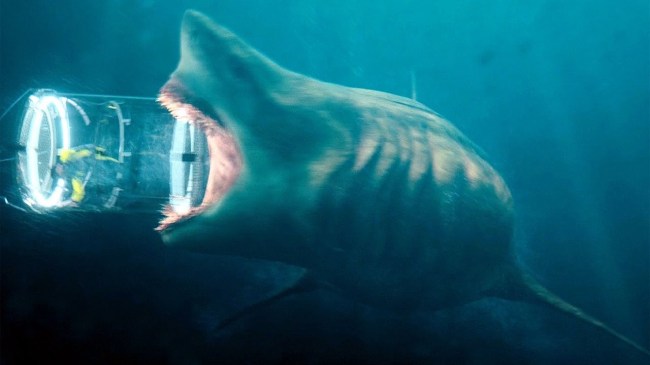 If you’re of the opinion that there’s no weapon in a shark’s arsenal scarier than its size, you’re going to love this one.

This 2018 Jason Statham vehicle is about a group of scientists who find themselves faced with the less-than-desirable duty of having to deal with a 75-foot shark. The massive beast in question is a Megalodon A.K.A. Carcharocles megalodon, which probably means “big shark” in Latin, a language I’ll admit I have almost no knowledge of.

Scientists would have you believe the Megaladon has been extinct for millions of years but I’d love to see those idiots try to explain how one was discovered alive and kicking around in the depth of the Pacific Ocean.

This guy manages to make the bodyslamming predators from Sharknado look like Swedish Fish in comparison and it’s the sheer magnitude of a shark this big that earns it the fourth spot. 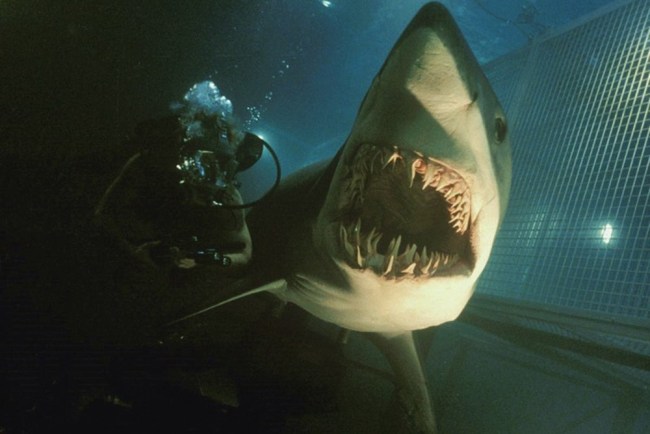 Sharks are not the smartest ocean dwellers by any stretch; that award goes to dolphins (although I’m sick of hearing about them. An air-breathing mammal that decided living underwater was a great choice? Yeah, that just screams high-level intelligence).

The sharks at the center of 1999’s Deep Blue Sea have the benefit of having some extra smarts at their disposal courtesy of researchers attempting to develop a cure for Alzheimer’s in a laboratory deep in the blue sea (because science works best at places that are hard to get to but look totally bitchin’). The sharks that served as test subjects begin to exhibit an extreme amount of intelligence and come up with a plan to make everyone’s life as miserable as possible.

The movie is an example of one of my favorite Hollywood tropes: scientists who can’t keep their hubris in check and end up facing the catastrophic consequences of their actions. If you look deep enough, there’s probably a moral in there about how we shouldn’t mess around with nature, but all I see are sharks who aren’t mindless killers but killers who know exactly what they’re doing. 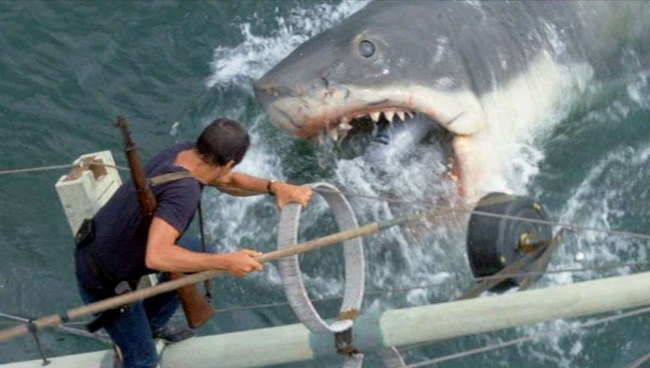 Jaws is widely regarded as the first summer blockbuster and for good reason. It features iconic performances from Roy Scheider as Police Chief Martin Brody, Richard Dreyfuss as marine biologist Matt Hooper, and Robert Shaw (who kind of steals the show) as Quint, the captain of the Orca.

Of course, you can’t have a shark movie without a shark, and in this case, the bane of everyone’s existence was portrayed by a hydraulically-powered prop named Bruce, which is absolute nightmare fuel if you happen to suffer from submechanophobia.

With Stephen Spielberg at the helm, this movie scared an entire generation of people and beyond when it comes to the ocean (which I think counts as a success) and a big reason for that was how terrifying the shark was (and continues to be).

It may look a little funny at times to 21st-century eyes that are so used to computer-generated special effects, but the shark in Jaws is at it’s scariest when you can’t even see it, whether it’s pulling a fisherman off a dock or getting ready to ruin poor li’l Alex Kinter’s day at the beach.

The shark’s demise is also one of the greatest endings in cinematic history. I legitimately get amped up every time Chief Brody fires a shot that misses the oxygen tank lodged in the shark’s mouth, reloads, and utters the immortal line “Smile, you son of a bitch!” before treating us to the most satisfying BOOM! ever. 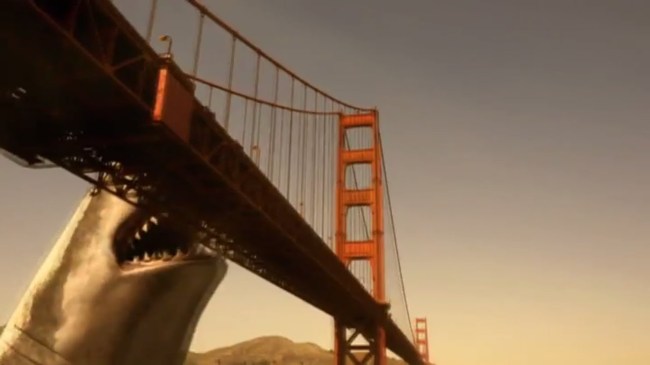 One thing that just about all of the previous entries on this list had in common is that someone would only be in danger if they strayed into the water. This is the one major exception.

If I had to make a list of places where I thought one would be safe from a shark, I’d probably have “Inside A Commercial Airliner At Cruising Altitude” perched at the top of my list.

How naive of me.

Mega Shark Versus Giant Octopus centers around Mega Shark and Giant Octopus swimming around the ocean and just causing problems for everyone and everything. Giant Octopus attacks an oil rig at one point, but it’s Mega Shark’s magnum opus that we need to talk about.

Displaying incredible strength and speed (as well as a NASA-level understanding of physics) Mega Shark launches itself out of the ocean and tens of thousands of feet into the air to attack a commercial airliner.

Delays and lost luggage are a pain in the ass but those would be minor inconveniences compared to being plucked out of the sky by a giant fish.

There’s a pretty incredible graphic that shows exactly what kind of speed and power would be required to make this feat possible, so yeah, good luck beating Mega Shark.