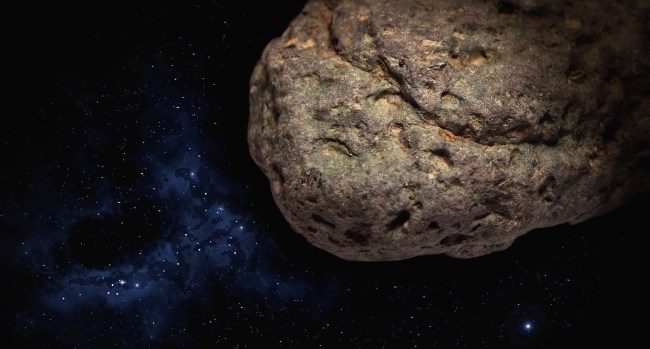 Scientists have found organic matter and water on the surface of a sample from an asteroid for the first time ever.

You know what this means, right? Aliens. No? It doesn’t? Hmmm…

According to Republic World, the asteroid sample, which is merely a grain of asteroid dust taken from a space rock named Itokawa, was collected by the first Hayabusa mission conducted by the Japan Aerospace Exploration Agency (JAXA) in 2010.

These findings were published last week in the journal Scientific Reports.

“After being studied in great detail by an international team of researchers, our analysis of a single grain, nicknamed Amazon, has preserved both primitive (unheated) and processed (heated) organic matter within ten microns (a thousandth of a centimetre) of distance,” Dr. Queenie Chan of the Department of Earth Sciences at Royal Holloway, University of London, said in a statement.

What all of that means is that with this discovery scientists may now be able to use this information to better understand the history of the Earth, and perhaps even be able to determine whether the water and organic matter originated on Earth, an alien planet, or, as is surmised in the study, have come from the asteroid itself.

The Independent reports that researchers are suggesting “the asteroid had been evolving for billions of years by incorporating the liquid and organic material in the same way Earth does.”

“These findings are really exciting as they reveal complex details of an asteroid’s history and how its evolution pathway is so similar to that of the prebiotic Earth,” said Chan.