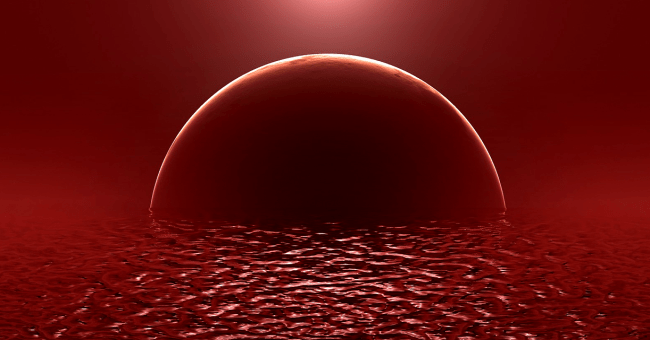 An international team of researchers led by the University of Montreal recently discovered a giant alien “super-Earth” exoplanet that they believe may be covered in water.

A super-Earth, according to NASA’s definition, is “a class of planets unlike any in our solar system – are more massive than Earth yet lighter than ice giants like Neptune and Uranus, and can be made of gas, rock or a combination of both. They are between twice the size of Earth and up to 10 times its mass.” An exoplanet is a planet that orbits around a star outside the solar system.

This newly discovered exoplanet, named TOI-1452 b, is about 70% larger than Earth, roughly five times as massive, and its based on density, NASA reports, “could be consistent with having a very deep ocean.”

In a press release, the researchers who discovered TOI-1452 b state that this new exoplanet is located in the Draco constellation orbiting a red-dwarf star about 100 light-years from Earth – which in astronomical terms is relatively close to Earth.

The scientists also stated that Planet TOI-1452 b is located “at a distance from its star where its temperature would be neither too hot nor too cold for liquid water to exist on its surface” and could be an “ocean planet” completely covered by a thick layer of water.

“I’m extremely proud of this discovery because it shows the high calibre of our researchers and instrumentation,” said René Doyon, University of Montreal Professor and Director of iREx and of the Observatoire du Mont-Mégantic (OMM). “It is thanks to the OMM, a special instrument designed in our labs called SPIRou, and an innovative analytic method developed by our research team that we were able to detect this one-of-a-kind exoplanet.”

The exoplanet TOI-1452 b is probably rocky like Earth, but its radius, mass, and density suggest a world very different from our own. Earth is essentially a very dry planet; even though we sometimes call it the Blue Planet because about 70% of its surface is covered by ocean, water actually only makes up a negligible fraction of its mass — less than 1%.

Water may be much more abundant on some exoplanets. In recent years, astronomers have identified and determined the radius and mass of many exoplanets with a size between that of Earth and Neptune (about 3.8 times larger than Earth). Some of these planets have a density that can only be explained if a large fraction of their mass is made up of lighter materials than those that make up the internal structure of the Earth such as water. These hypothetical worlds have been dubbed “ocean planets.”

Related: NASA Set To Study ‘Super-Earth 55’ – A Planet So Hot That It Literally Rains Lava

“TOI-1452 b is one of the best candidates for an ocean planet that we have found to date,” said Charles Cadieux of the University of Montreal. “Its radius and mass suggest a much lower density than what one would expect for a planet that is basically made up of metal and rock, like Earth.”

NASA, pouring cold water on the discovery, also stated that TOI-1452 b might end up being just “a huge rock, with little or no atmosphere” or a “a rocky planet with an atmosphere of hydrogen and helium.”

They did, however, add a few positive notes.

“Planet TOI-1452 b seems perfectly positioned for further investigation by the James Webb Space Telescope,” NASA wrote, adding, “it also appears in a part of the sky, in the constellation Draco, that Webb can observe almost any time of year.”