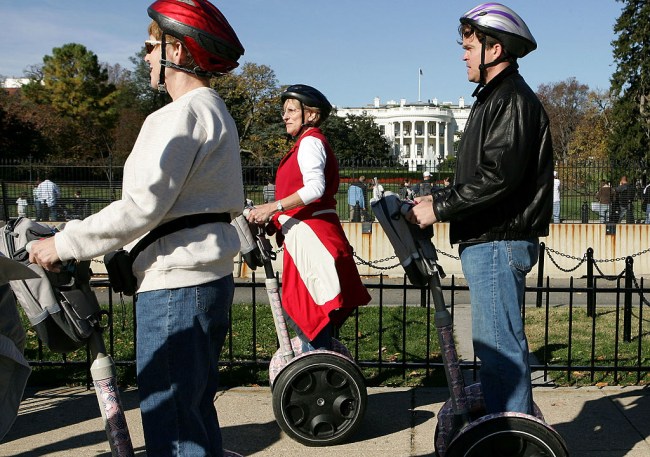 Every once in a while, the world is introduced to a truly game-changing innovation that makes you wonder how we possibly survived without it; the kind of radical invention that permanently alters the way we go about our daily lives, whether we’re talking about the iPhone, ride-sharing apps, or those helmets that let you drink beer through a straw.

On December 3, 2001, people around the country tuned into Good Morning America and waited with bated breath in anticipation of the reveal of a mysterious new product from the mind of a serial inventor named Dean Kamen, who promised it would turn the world on its head. It was a bold claim, but the device was financially backed by Jeff Bezos and endorsed by Steve Jobs, who publically claimed it had the potential to be as revolutionary as the personal computer.

After months of anticipation, the big reveal finally arrived and the world was introduced to the Segway in addition to the crushing sense of disappointment that came with realizing we’d all been strung along.

Kamen was adamant his $4,950 “personal transporter” would change the way people would get around, and while he was technically correct, the people in question were almost exclusively security guards tasked with patrolling malls and sightseers who didn’t feel embarrassed riding one because their affinity for cargo shorts and fanny packs had already made them immune to ridicule.

The amount of excitement and intrigue Kamen managed to generate ahead of the device’s unveiling was certainly impressive but it was also arguably his downfall, as there was virtually no way it was going to be able to live up to the hype.  Segway was eventually sold to British businessman Jimi Heselden in 2010, who you may know better as “the guy who died after accidentally driving his company’s flagship product off of a cliff.”

Now, that product has also met its demise, as Fast Company reports Segway will permanently stop manufacturing the device on July 15th as it shifts its focus to e-scooters and attempts to figure out other ways it can harness the over 1,000 patents it currently holds.

My thoughts and prayers go out to Paul Blart during these difficult times.