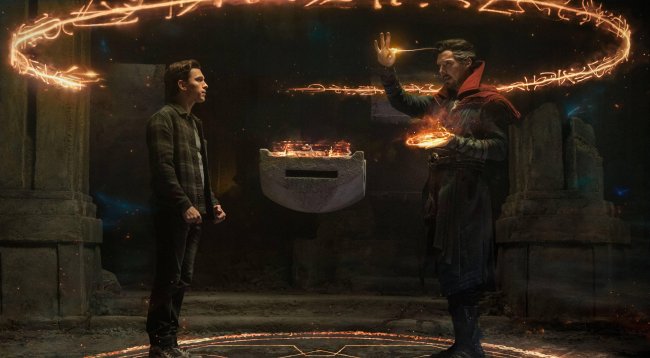 Doctor Strange is probably my favorite Avenger. The idea of an outsider who becomes an insider has always fascinated me and that’s essentially what Doctor Strange is, as his magical and mystical abilities are almost completely incongruent with the rest of the Avengers’ powers. Even he and Tony barely got along. Plus, he’s effective as hell, as an argument can be made that he’s the Most Valuable Player in the Infinity Saga battle against Thanos: not only is he the only one able to hold his own 1-vs-1 against the Mad Titan, but he’s essentially the architect of the long-play to beat him: it’s his decision to give Thanos the Time Stone that sets everything in motion.

Lately, though, my man Doctor Strange has been slacking: despite telling Tony Stark that his job is to “protect your reality, douchebag,” reality has been nothing short of a disaster since, what with Wanda creating her own reality in the New Jersey suburbs and Loki exploding the multiverse into oblivion. Doctor Strange has one job and he ain’t doin’ it. And given the inclusion of his trusty sidekick Wong and the mystical/magical elements throughout Shang-Chi and the Legend of the Ten Rings, the Phase 4 Paradox will likely arise again, leaving fans pondering the same question they’ve had since WandaVision: where the hell is Doctor Strange?

During an interview with Shang-Chi director Destin Daniel Cretton, I have the Short Term 12 and Just Mercy filmmaker a chance to get ahead of the curve and share his explanation as to why the Sorcerer Supreme is noticeably absent from Phase 4 events (thus far), and his answer certainly didn’t disappoint.

“I will respond by saying you’re not alone in asking that question and there is a *very clear* answer to that question. All of those types of ‘Where people are in the universe at this particular moment’ — there are clear reasons why Doctor Strange is not there. I wish we could’ve put Doctor Strange in our movie. But there are very clear reasons why the characters who showed up could show up very briefly, there’s also a very clear reason why they’re not physically in the room. But, all of that is a big conversation with Kevin [Feige] and the producers and directors who are working on other things.”

Given Strange’s extremely questionable decision-making in the Spider-Man: No Way Home trailer, it certainly feels like Marvel is cookin’ up something shady with the Sorcerer Supreme. With Doctor Strange in the Multiverse of Madness is set to release in March, hopefully, we have answers by then.

Make sure to check out the excellent Shang-Chi and the Legend of the Ten Rings when it hits theaters on September 3, and to listen to our full interview with director Destin Daniel Cretton when it drops later this week.

Doctor Strange is my favorite Avenger and arguably the MVP of the general Infinity War/Endgame battle against Thanos… but my man has been like Carson Wentz ever since.