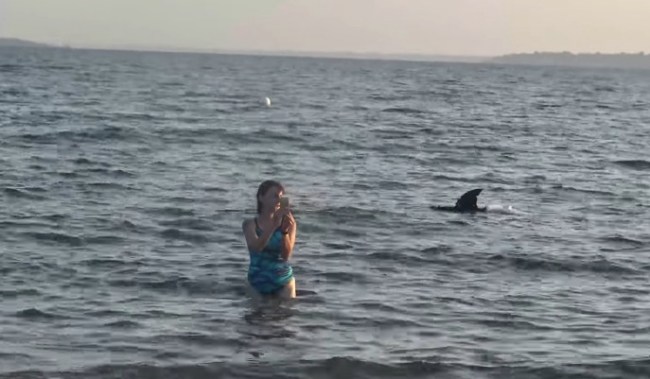 For our entire lives, we’ve been inundated with facts about how rare shark attacks are.

On average, there are only 19 shark attacks in America per year. According to Nat Geo in 1996 there were 46,000 Americans injured by toilets and only 13 injured by sharks. And each year lightning *kills* 41 people in the *coastal states* alone while only an average of 19 people are attacked by a shark (not killed, just attacked).

Despite the chances of a shark being insanely small, we as a species remain scared shitless when it comes to shark attacks.

You know what else scares the shit out of people? Alligators and crocodiles. That’s something that YouTube prankster Jay Karl figured out when he pulled this amazing stunt a few weeks back where he rigged a remote-control boat to an alligator head and scared the piss out of people.

Well, he’s back. This time around he’s rigged up a fake shark fin and he’s headed to the beach where he’s pulling the fake shark up on swimmers and watching as they lose their damn minds.

The prank opens up with a woman telling him ‘you guys are going to tell for this’ which is actually a pretty level-headed response to someone telling you the shark attack you just survived was really a harmless prank for YouTube. If that’s me, and I’ve been drinking at the beach all day, I’m not sure if I’d be able to react as calmly.

That’s cold-blooded. The people were never in real danger, obviously, but that doesn’t make this any less cruel.

In their minds, they genuinely thought they were at risk of being attacked by a shark. And this is a memory that will follow them for the rest of their lives regardless of whether or not they’re ever in any real danger.

And while this was a solid prank I’d like to point out that logistically it didn’t work as well as the alligator head because in that case, you’ve got a full skull hiding the R/C boat. Here, you have to build some sort of a hidden platform to hide the boat and this makes the shark fin look somewhat out of place if you look closely at it.

I wanted to send a shout out to Jay Karl for sending this video to the BroBible tip line!

If you ever see anything you think would be a great fit for the BroBible audience you can always send it to me on Twitter at @casspa, or you can email it to the BroBible tip line by filling out this form right here.