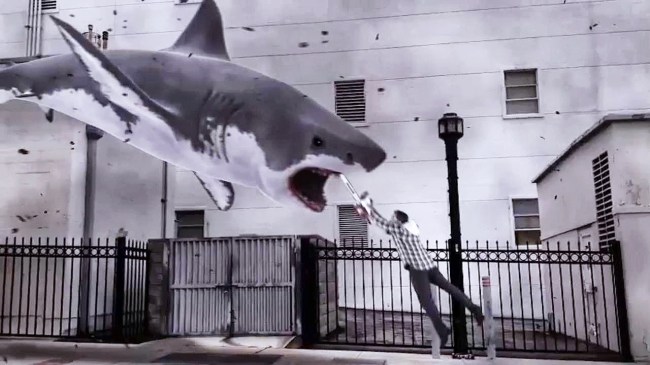 “People Battling Unrealistic Natural Disasters” has been one of my favorite film genres since I saw a cow fly across the screen in Twister, and I’m a sucker for any movie where humans are cocky enough to think they can take on nature— whether it’s Dwayne Johnson fighting an earthquake or Dennis Quaid simultaneously battling a tsunami, deadly temperatures, and a mediocre plot.

Thankfully, the folks at SyFy share my appreciation for the genre (as well as basically every other genre you can think of that involves humans fighting something). As a result, it was hard to hold back my excitement when they announced the release of a movie with the best (and most self-explanatory) name since Snake on a Plane: the made-for-TV masterpiece known as Sharknado.

A tornado! Made of sharks! What else could you possibly want? As if SyFy knew that question was coming, they also announced Tara Reid would have a leading role, which was more than enough to get close to 2 million people to watch it when it first aired. The network followed the original up with a number of sequels that never really managed to capture the magic of the first, and as of August, the franchise will officially come to a finish.

According to TVLine, SyFy has decided to go down a different path, and the series will end when its final installment— which will involve time travel in a plot I’m sure won’t have any logical flaws.

Don't forget to pick up your time travel gear from the cleaners.#Sharknado6 hits this summer! 🦈🌪️6⃣https://t.co/UIKqTdw7Rw pic.twitter.com/h6lzcF98t6

Remember: don’t cry because it’s over. Smile because it happened.