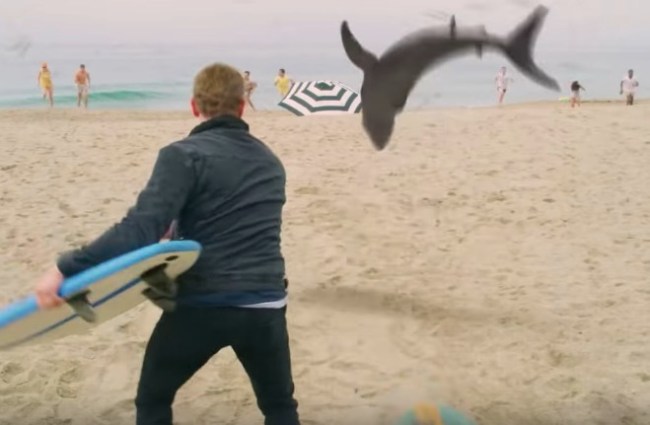 It’s hard to believe that last night the final installment of the Sharknado series premiered on the SyFy network.

Sharknado 6: It’s About Time was the 6th and final film in the epic franchise about tornadoes picking up sharks and terrorizing the world. I spent 8 hours yesterday watching a Sharknado marathon on the couch after introducing my cousin to the films for the first time.

I’ll admit that Sharknado 6: It’s About Time wasn’t necessarily my favorite film in the series. I was a big fan of Sharknado 2 and Sharknado 3: Oh Hell No!. And I believe the 6th film focused a little too much on rebooting the film franchise instead of actual sharknados, but it was still a glorious film.

They jumped through time and fought dinosaurs, met a sorceress, fought alongside Benjamin Franklin and changed the course of history. They jumped into a dystopian future with robot sharks. This movie had it all.

There’s something about sharks getting sucked up into a vortex and thrown into a city that just brings out the best that Twitter has to offer and I wanted to share some of last night’s best tweets with you dudes so you could get a taste of what you missed if you weren’t watching Sharknado 6: It’s About Time.

Frankly, I don’t understand this sentiment. If your family isn’t into tweeting and Sharknado then just trade them in for a newer, better family:

It’s hard to simultaneously watch, tweet and be chastised by my family for watching #Sharknado6.

But I’ll find a way.

#Sharknado6 sharknado costume i made for halloween pic.twitter.com/QhCZZWjQig

Few people know this, but #Sharknado6 is based on a true story!!!

They say that this is the last of the Sharknado films but I’d be SHOCKED if there wasn’t another one next year. Shocked.

#Sharknado6 ? Sis, the Fast and the Furious franchise is shaking.

Talk about throwing everything INCLUDING the kitchen sink. #Sharknado6 pic.twitter.com/1QtU7dLDGY

One of the best GIFs of the night, just before Fin met his parents on the beach:

Our 12yo: "You know how you can write a story by just pressing the middle autofill button on your phone and it just takes random words? I think that's how they wrote this movie." #Sharknado6

Let this sink in:

This was one of best moments:

oh my god #Sharknado6 is the greatest film of all time. pic.twitter.com/7q1GBGh8WX

Taking time out for a selfie 😎 #sharknado6 pic.twitter.com/C5QxsbVTIg

#Sharknado's commitment to justify the science behind sharknados has resulted in a Neil deGrasse Tyson cameo. #Sharknado6 pic.twitter.com/CsOTvOWF5V

That speech by @IanZiering at the end of @SharknadoSYFY got me right in the feels. It’s been a great run. I loved these movies so much, they were fun and for a little while took me out of the real world. #Sharknado6

So, the film ended with Tara Reid and Ian heading to the hospital to give birth to a baby and then fade to black.

If the film doesn’t reboot with an alien shark baby inside of her then the franchise has failed us. We need this zombie reboot. It has to happen.