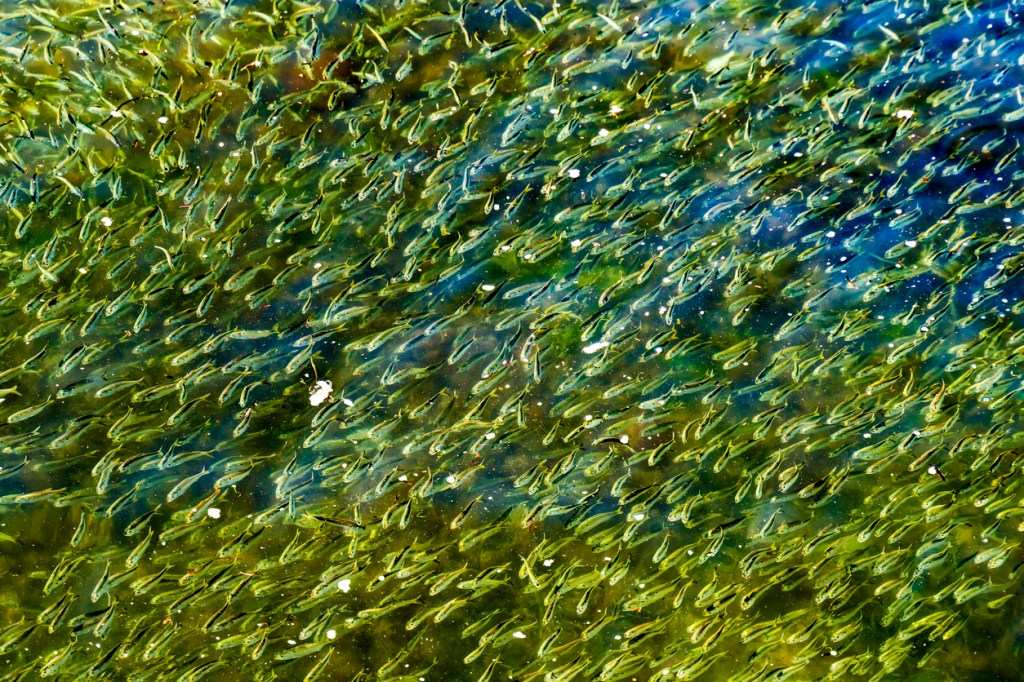 There are times of the year when schools of Atlantic Menhaden get so big it looks like the water is boiling in every direction. I wouldn’t even know where to begin with estimating the total number of fish in one of these schools of Menhaden but it appears to be over a million to me when it measures a quarter-mile long and god knows how deep below the surface.

These schools are remarkable in their density too. I went Striper fishing in Newport, RI a few years ago, and to catch bait we just pitched huge treble hooks into the Menhaden schools and snagged them. There were so many fish in the schools we’d come back with three fish on the hook every time. It was the easiest experience I’ve ever had with catching bait (that didn’t involve throwing a cast net).

Here we see one of these truly gargantuan schools of Atlantic Menhadden on display. But instead of focusing on the fish, we’re really looking at the sharks here. This was filmed just 90 miles from New York City out in Southampton in The Hamptons.

The sharks seen here are Blacktips and Spinner Sharks according to the YouTube caption from ‘Fish Guy Photos’ who filmed this incredible footage. Here’s the clip via YouTube, Twitter, and Instagram so you can choose your preferred medium to watch the video:

Sharks were caught on camera swimming through schools of fish in Southampton, NY on July 24. The Fish Guy shared the video and said the sharks were feeding on Atlantic menhaden pic.twitter.com/F2Pp2squvI

I’ve never actually caught a shark while fishing in New York, at least not one that I can remember. Maybe I reeled in something small while fishing for seabass in the past but I’ve certainly never brought in a shark this size up in New York.

But this all reminds me of that fishing show ESPN used to air back in the mid-2000’s that followed boats in the Montauk Shark Fishing Tournament. I can’t remember the name of the show but they framed it as something like ‘monster shark fishing’ and I’m only now realizing I haven’t seen it on TV in 10+ years. The only conclusion I can draw is shark conservation groups convinced ESPN to stop airing that show but man, it was awesome.

By the way, if you’re looking for some more awesome shark footage in your life be sure to hit that ‘follow’ button on that guy’s Instagram because his feed is pretty spectacular.