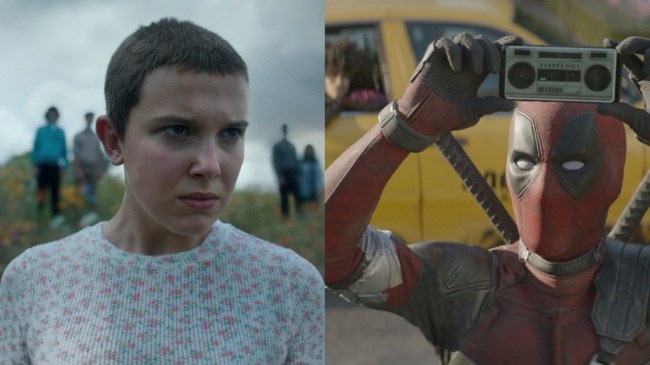 I interviewed Shawn Levy earlier this year and I really liked chatting with him. He seems like a truly decent, while also wildly energetic, dude. I told him as much during our conversation if you want to check that out.

The reason that I mention my interaction with Levy is that I want to make clear that, despite how much I genuinely liked the dude, I think his recent comments about crossing over the Stranger Things and Deadpool universes are absolutely INSANE and is exactly what’s wrong with Hollywood at the moment.

“Funnily enough, Ryan [Reynolds] and I were trying to figure out how in the world could we do a Deadpool-Stranger Things crossover. We haven’t cracked it yet, but it’s on the table,” Levy told Variety at the Emmy Awards on Monday night.

#StrangerThings executive producer Shawn Levy on a potential crossover: “Ryan and I were trying to figure out how in the world can we do a 'Deadpool' [and] 'Stranger Things' crossover.” #Emmys #Emmys2022 | Variety On the Carpet presented by @DIRECTV https://t.co/SPeOTdJWon pic.twitter.com/1elwgNrV7Z

Deadpool and its sequel are two of the top three highest-grossing R-rated films of all time, while Stranger Things is arguably the most successful series in the history of Netflix. There is no reason — logically, narratively, or financially — to do something like this other than a base desire to simply smash franchises together for the sake of it. Can you imagine Deadpool having a conversation with Dustin? That sounds like a waking nightmare.

Needless to say, Levy’s comments were far from well-received by the pop culture community, with one Twitter user even joking to “please take the cocaine away from these people.”

genuinely what is even going on anymore https://t.co/i4NczzXigG

Mfs be like "funnily enough" and proceed to talk about the least funny thing ever conceived by a human mind https://t.co/E7ZqoR8lsD

can you imagine if they also added taika waititi and just let him riff on a level that's frickin' sublime https://t.co/mtfQf3zous

Goonies, yes. Indiana Jones and the temple of doom,maybe.
But this!?
No. Just no. https://t.co/no5tsCTirN

………. just end the show and kill all the characters atp no way millie wants any part in that https://t.co/RANdoTTSPf

This would be insufferable https://t.co/0KsEh0qNl4

two of my favorite things and i dont wanna see it https://t.co/lZBPGWnDQE

Shawn, you’re great at what you do: Stranger Things rules and there’s no doubting Deadpool 3 will be a blast, too. Let’s just stick to that and not overcomplicate things. If it ain’t broke, don’t cross ’em over — that’s how the old saying goes, right?