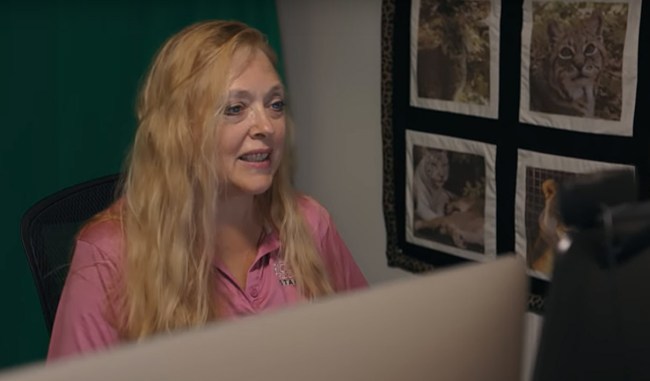 Ever since the Netflix documentary Tiger King: Murder, Mayhem and Madness went online viewers have had one question on their minds: Did Carole Baskin kill her wealthy second husband Don Lewis?

Naturally, Baskin strongly denies that she killed him or had him killed, but internet detectives have been having a heyday trying to put the pieces of this over 22-year-old cold case together.

And they’re not the only ones.

Hillsborough County Sheriff Chad Chronister recently began asking for assistance in trying to solve the case thanks to the massive success of Tiger King.

Baskin, who declared Lewis legally dead one day after she was legally allowed to do so, has found herself in the crosshairs with new information coming out about how a boyfriend she had after Lewis’ disappearance, Jay Bakyal, much like her missing husband, also filed for a restraining order against her, fearing for his safety.

Since Chronister’s request for any information related to Don Lewis’ disappearance, tips have been coming in fast and furious, including one from a woman who was previously married to a co-worker of Don’s who believes Carole “masterminded Don’s demise.”

CNN also reports that Chronister is now receiving about six tips a day regarding the Don Lewis case.

“We are already receiving new tips and we hope to close this cold case soon with the help of the public,” Chronister told CNN. “Since the documentary came out we’ve been receiving about six tips a day related to this case. We are looking into each one thoroughly.”

According to NBC affiliate WFLA…

The sheriff’s office had a meeting on Monday regarding the case and will be reviewing “a lot of the evidence.”

The sheriff confirmed Baskin said her attorney told her to refuse a polygraph test.

Lewis’ will is going to be reviewed by the sheriff’s office.

“There is a lot of suspicion that surrounds that will,” Chronister said.

He said the meat grinders mentioned in the documentary series were removed several days before the sheriff’s office searched Baskin’s property, so there was no way to test them.

The septic tank mentioned in the series, the sheriff said, was put in place years after Lewis’ disappearance and is not relevant to the case.

So much for that theory. Sorry, Joe.

“Like any case at the Hillsborough County Sheriff’s Office we want to bring closure to the families involved and the community,” Chronister added while speaking to CNN. “We are seeing greater interest in this case thanks to Tiger King and we encourage anyone who knows something to call 813-247-8200.”

Keep at it, internet detectives. We’ll get this all sorted out, even if law enforcement can’t. What the hell else do we have to do these days?

#TigerKing  Nebraska Ave in Tampa is where you could pick up hookers. Interesting that Carole Baskin was walking down Nebraska when she met her late husband. #Hookerlife #CAROLEBASKINS #JoeExotic

That street in Tampa is where the hookers look for customers
Carole husband was her customer!
‘cool’ cats and kittens, when will Carole Baskin confess to murdering her husband?
Joe Exotic