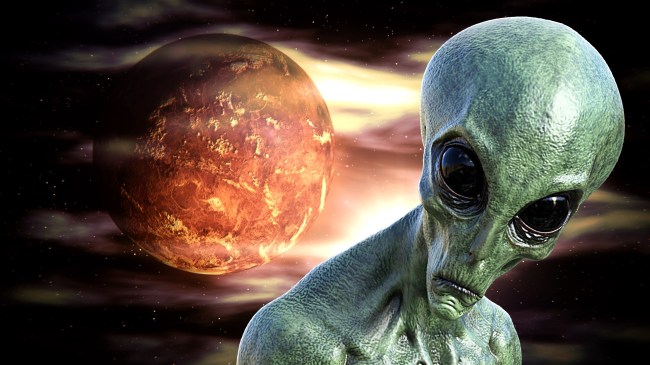 As we have been saying for quite some time now, the truth is out there. Now, the out there might actually be on Venus, based on new research conducted by the Royal Astronomical Society.

For years, our next-door neighbor in the solar system Mars was astronomers’ target planet for locating extraterrestrial life (and appropriately, it still is), but as Sarah Stewart Johnson, a planetary scientist and head of the Johnson Biosignatures Lab at Georgetown University said about this new discovery, “Venus has been ignored by NASA for so long. It’s really a shame.”

That’s because, as conspiracy theorists are quick to point out, NASA doesn’t want us to know the truth.

These new findings, reported in papers published in the journal Nature Astronomy on Monday, reveal the presence of phosphine in the atmosphere of Venus.

Why is this important?

According to the New York Times, it is because these “scientists assert that something now alive is the only explanation for the chemical’s source.”

“This is an astonishing and ‘out of the blue’ finding,” said Sara Seager, a planetary scientist at the Massachusetts Institute of Technology and an author of the papers (one published in Nature Astronomy and another submitted to the journal Astrobiology). “It will definitely fuel more research into the possibilities for life in Venus’s atmosphere.”

“We know that it is an extraordinary discovery,” said Clara Sousa-Silva, a molecular astrophysicist at Harvard University whose research has focused on phosphine, and another of the authors. “We may not know just how extraordinary without going back to Venus.”

David Grinspoon of the Planetary Science Institute in Tucson said about the discovery of the alien biosignature, “This could be the first observation we’ve made which reveals an alien biosphere and, what do you know, it’s on the closest planet to home in the entire cosmos.”

Venus is often referred to as Earth’s twin due to its similar mass and the fact that many astrobiologists believe it once was, like Earth, covered mostly in water and had an atmosphere suitable for living organisms.

“When our team actually found phosphine in the clouds of Venus, it was a huge surprise!” said Dr. Emily Drabek-Maunder of the Royal Observatory Greenwich. “At first, I had my doubts, but once we confirmed our initial detection of the gas with an independent telescope, that was what confirmed it for me.”

Obviously, more research is needed to confirm these findings and a trip to Venus also wouldn’t hurt, but this is, as Paul Byrne, a planetary scientist at North Carolina State University in Raleigh, stated, “astonishing.”

Now we just need to figure out how to land a craft on Venus without its atmospheric pressure, which is 92 times that of Earth, crushing it and melting it down (Venus has a mean temperature of 867°F). No biggie.