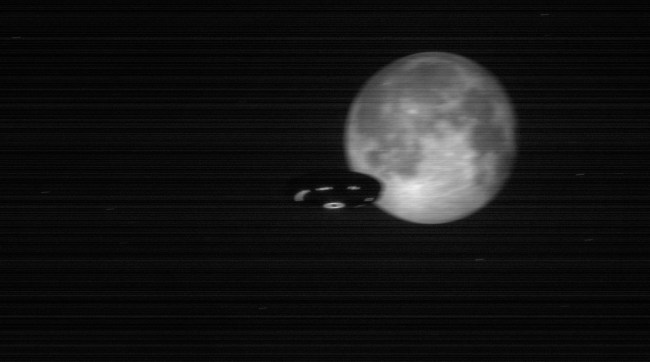 For decades people have been accusing the government and NASA of covering up UFO and alien sightings. And with good reason, because they were.

As the Senate Intelligence Committee voting to release government UFO reports to the public last week, along with the United States Navy and the Pentagon finally releasing videos have shown, there is still much information not yet being revealed to the general public with regard to the alien and UFO phenomenon.

Another example of this was seen this week when prolific UFO and alien expert Scott Waring on his website that reported NASA and other space agencies of the world deleted certain photos in their archives which he claims show an alien spacecraft flying past the sun.

“I found a huge rectangle UFO shooting past our sun and its got to be several miles across or more,” he wrote. “I tried to find it on Helioviewer.org a SOHO/NASA site, but I got an error message. Then I tried using official ESA European Space Administration software…and again, error message. Then I went into the individual photos online and input my own URL, but these photo times do not exist. Thats there different sources all erased from existence. I found it at a fourth source and there is no way in hell I will reveal it, but it’s a NASA source thats all I will say. I don’t want my source cut off too.

“This UFO is seen in twenty different photos in a row! It’s seen over a three day period and NASA said nothing to the public!

“If I [hadn’t] caught it, the world may have never even known this huge UFO existed and traveled right past earth and our sun.

Waring delved even further into his shocking discovery in a video discussing the find.

“Look at this thing, this is incredible. It is unbelievable,” he says.

“This thing is actually moving away from the sun and it is a huge rectangle object flying past,” he continued. Why? Why would NASA wipe these things from their archives?”

Viewers of the video were, of course, blown away.

“I think we all know NASA has been lying to us for over 50 years!!” wrote one commenter.

“Suspicious of it not showing up on LASCO. NASA playing its tricks again,” another commented.

“People are saying it’s a comet but why would they delete the evidence of a comet?” asked another viewer.

I think we all know the answer to that question and all the other ones posed here today.