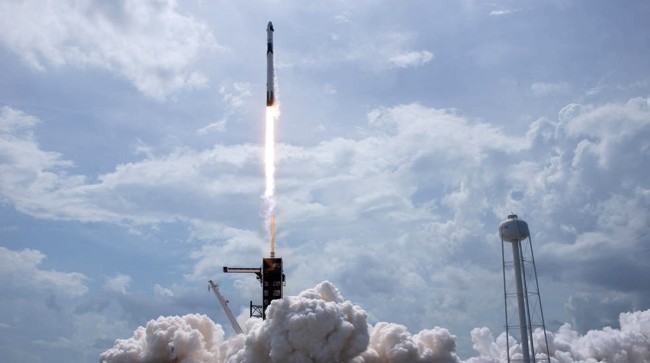 With aliens reportedly monitoring us to see how we are handling the pandemic that they may or may not have caused, is it any wonder that they would also be very interested in closely observing the first manned space launch from American soil since 2011?

Of course it isn’t. We would expect nothing less at this point in time.

“The launch of this commercial space system designed for humans is a phenomenal demonstration of American excellence and is an important step on our path to expand human exploration to the Moon and Mars,” said NASA Administrator Jim Bridenstine.

Designed for humans? Was that a slip? Who else would the spaceship have been designed for, Mr. Bridenstine?

Also, one thing that went unmentioned during and following the launch of the SpaceX Dragon was the fact that a slew of people reported seeing UFOs in the vicinity of the SpaceX craft.

Was that a ufo or something? at time T+ 00:14:11. It was rising from under the clouds so fast! #LaunchAmerica #SpaceX #ElonMusk pic.twitter.com/9Q0vliN1a3

Nice UFO on live stream !thanks for this ❤️ pic.twitter.com/sZpoMcezWR

Did y’all see the #ufo on camera today….. watch this!!! We just saw this!! This is us recording from our tv! #SpaceLaunchLIVE #SpaceX pic.twitter.com/Wg2PE055Hu

UFO and alien expert Scott Waring was among those who spotted an alien craft and discussed the one of the sightings on his website.

This is a great capture of a UFO flying past the Dragon SpaceX capsule while it was about to dock at the space station. This UFO passed in front of the spacex capsule, so we know its small, like an alien drone monitoring history being made.

Its strange that neither NASA or SpaceX mentions what this strange glowing object is since it came within a few meters of the capsule carrying two astronauts. You would think anything that close would be seen as a possible threat to the lives of the astronauts, but nothing was said.

And don’t even get us started on the “mouse” that was planted on the SpaceX rocket to keep tabs on the launch, or the fact that the entire spectacle was probably a hoax.

Rewatched the launch my self on YouTube. You guessed it a ducking MOUSE or small rodent in "SPACE" at the 4.13 mark. Elon Musk is a deep state fraud. #SpaceX #spacexlaunch #ElonMusk pic.twitter.com/bmBmNvYV9a

Yes of course it is they are all in the NASA studio where they can play this hoax out! Like super mouse can survive with a rocket launch, able to scurry on a rocket in space! Come on with this laughable hoax!