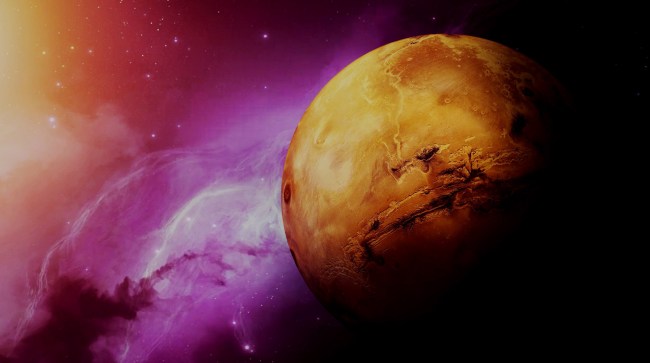 Earlier this week, we reported about how a prominent astronomy and astrophysics professor at Penn State published a research paper in which he states that advanced alien life forms may have once existed on Earth.

And while that may be true (it probably is), one of the other main focuses of both alien hunters, including private enterprises as well as the United States government, is the fact that there seems to be more and more certainty that extraterrestrial, non-human life once inhabited the planet next door to Earth, Mars.

The interest in learning more about this possibility has only spiked during the recent pandemic as former NASA Director Scott Hubbard warned the next killer supervirus could be alien in nature, if it isn’t already.

“In my opinion, and that of the science community, the chance that rocks from Mars that are millions of years old will contain an active life form that could infect Earth is extremely low,” Hubbard wrote. “But, the samples returned by MSR (Mars Sample-Return) will be quarantined and treated as though they are the Ebola virus until proven safe.”

This week, prolific UFO and alien expert Scott Waring took another step closer to discovering the truth about the red planet while he was studying a Mars gigapan photo.

I was looking though a Mars gigapan photo when I came across two big heads and maybe a third all near each other. Then in front of a head I saw a pyramid. The pyramid has four sides and perfectly balanced on each side. It has sunk into the sands over time and one side of the pyramid is deep under the dirt, but we can still see its magnificent detail.

The faces are very primitive in design. One face has a helmet and two long ears sticking out, and a face with two eyes and a nose. The detail is poor, but who am I to judge whats beautiful or not on their Martian culture. There is also another face to the far left. It has a helmet and ear, nose eye cheeks and mouth visible. Partly blocking that face is…omg…looks like another unfinished face. Hmmm…kind of reminds me of how the ancient Egyptians had faces on the sphinx and giant statues of their pharaohs.

Waring further describes his discovery in the video below.

Is he on to something here? Hard to say for sure, and multiple commenters on his video were skeptical, but as long as people like him keep digging we’ll know the truth at some point because…