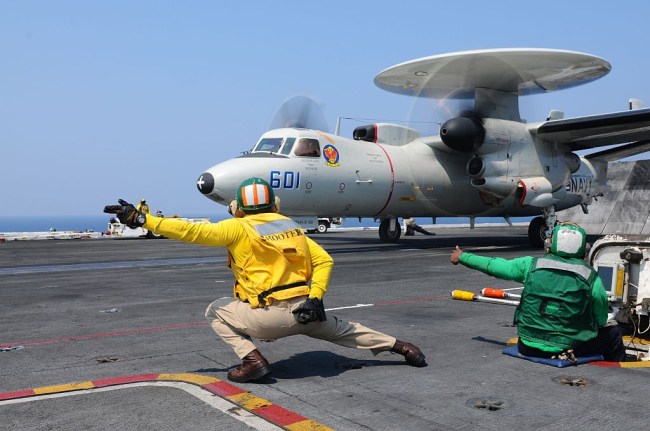 The USS Nimitz encounter with a UFO in 2003 continues to be the most credible unidentified flying object sighting of all-time. Now, an anonymous Navy technician has allegedly come forward to give their account of the encounter and revealed that they were forced to sign an NDA to keep whatever they saw a secret.

On November 14, 2004, U.S. Navy pilots encountered a UFO that boasted otherworldly flying capabilities. In October of 2019, Commander David Fravor went public with his account of a 40-foot-long white Tic-Tac UFO that he observed over the Pacific Ocean on the Joe Rogan Experience podcast.

While piloting his F/A-18 Super Hornet about 60 miles off the coast of California, Commander Fravor witnessed a UFO in the clear blue skies that defied the current expectations of modern aircraft. Fravor, who served 24 years in the military, said he saw a Tic-Tac aircraft that hovered over the ocean, had no wings, propellors, or exhaust. Fravor was an 18-year Navy pilot veteran who served deployments in Iraq that began during Operation Desert Storm.

Five Navy veterans have since come forward to verify Commander Fravor’s allegations of seeing an unidentified aerial phenomenon (UAP) in 2004.

Members of the USS Nimitz, as well as the USS Princeton, a Ticonderoga-class guided-missile cruiser that was supporting the Nimitz, have come forward to reveal that they saw a flying aircraft that was not a standard-issue aircraft. It has been known that the crew of the two F/A-18 Super Hornets sent to investigate suspicious radar signals of a potential threat, but now a third aircraft is said to have documented a UFO.

Dave Beaty, who directed the documentary The Nimitz Encounters, said he interviewed a U.S. Navy member who was an in-flight Navy technician aboard the E-2 Hawkeye providing support to the two F/A-18 Super Hornets investigating the strange aircraft in the Pacific Ocean.

Appearing on The Hidden Truth Show, Beaty said he spoke to an anonymous military member of the Nimitz Carrier Strike Group. “The gentlemen I spoke to, I checked his background, and he did fly in the Hawkeye,” Beaty said.

“The reason he didn’t want to come forward was because according to him, he had to sign a document right after the incident and said he wouldn’t talk about it,” Beaty said of the man’s anonymity. “Even going out on a limb and even mentioning it to me was sketchy for him. He didn’t want his name used.”

“He literally said, ‘That’s all I have to say about it, please don’t contact me again about it.'”

Beaty said the man he spoke to was taken to a private room on board the battleship and was told to sign a document, promising to not divulge what he had seen in the mission. Apparently, the U.S. government forced the Navy member to sign a non-disclosure agreement, but they did not give him a copy of the NDA.

“It wasn’t really a volunteer process, it was more a ‘sign this and don’t ever talk about what you saw’,” the anonymous man said.

This is a similar story as to what other military members who were involved in the USS Nimitz incident.

Petty Officer Patrick “PJ” Hughes was on the deck of the USS Nimitz aircraft carrier. Hughes had a friend who flew on the E-2 Hawkeye plane during the Nimitz UFO incident. The anonymous pilot who went by the name “Roger,” allegedly told Hughes that the five crew members of the plane also saw the UFO.

Once the Hawkeye pilots landed back on the USS Nimitz, Hughes says the E-2 crew were taken to a secure space on the ship. The crew members were reportedly told that “this event did not happen” and were forced to sign non-disclosure agreements (NDA).

Over 15 years later, nobody knows exactly what they saw in the middle of the Pacific Ocean.