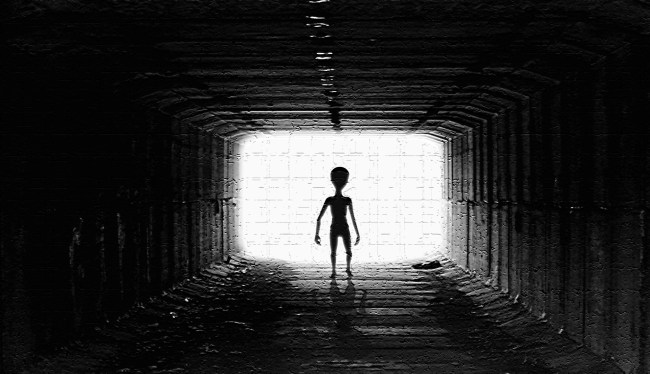 As we have seen several times in the past, the International Space Station has been a popular location for extraterrestrial aliens (assuming they are, in fact, aliens and not time-traveling human beings) to investigate as UFO sightings around the massive satellite continue to pile up.

Recently, another UFO sighting occurred during a live stream conducted by NASA of the International Space Station. This particular UFO was spotted on January 17, 2020 by noted UFO and alien expert Scott Waring.

“I was looking at the latest photos taken by the space station today and noticed a glowing oval UFO that was moving around in the distance,” Waring wrote on his website. “The UFO would go up and down and then move to the right and left. Its only seen in 7 photos, but when they are put together, you can see the erratic movement of this craft. This is incredible proof that the space station is being watched, visited and even scanned by alien craft.”

Waring recorded his sighting and shared the video on his YouTube channel.

In the video, there are seven photos taken by the International Space Station camera which clearly show the mysterious and fast-moving alien anomaly as well as what appears to be a fleet of some kind of orbs.

“It kind of looks like the UFO come down and seeded our planet with orbs to do some kind of drone work,” Waring says in the video. “But maybe these additional phenomena is simply pixilation.”

The orbs do look somewhat similar in nature to the first claimed picture of flying saucers, reproduced below from TeenAge Times in Dublin. The photograph below was accompanied by a news story which called flying are the forerunners to a space station [!] loaded with atomic and hydrogen bombs, which can be maintained in a stationary position over any point on the Earth’s surface for any lengh of time and then released to destroy a predetermined target.

One commenter on the video, X-15, stated their belief that what Waring was observing was “a mother ship vessel, that’s releasing smaller seintient intelligent utility orbs to do unknown task to [Earth’s] atmosphere.”

Commenter Maria Therese Nordenvald expounded on this theory, writing, “The orbs are sentient to both earths magnetism and the energy that sent them. They are perfect in shape for all kind of tasks. They are concentrated energy that exchange information, both recieving and sending in a beautiful way. They manifest by sourses outside them self but allso carries the power of self creation. They replicates when needed. They are nodes like cells in living beings. And like cells they contain all needed information, multiplied to not get lost if destroyed. The larger object with corona seen in this vid can be the link between the orbs and a mothership.”

Are they on to something? Take a look for yourself…

Unfortunately, there is no way currently for us to know if Waring and company are accurate in their assessments of the video, but the one thing we do know with 100 percent certainty is…

Previously…
• Mind-blowing new book puts forth theory that UFOs may actually be crafts piloted by time-traveling humans
• UFO hunters claim they are behind the unexplained group of Colorado drones, mystery remains unsolved
• Ominous black ring cloud hovers in the sky above Pakistan
• Glowing UFO spotted on NASA live stream of the Space Station sparks more claims aliens are real
• Newly declassified CIA intelligence report reveals new info about 1973 UFO sighting at ‘Site 7’ in Russia
• Navy admits it has additional ‘top secret’ footage of USS Nimitz UFO encounter but won’t release it
• UFO sighting? Mysterious object leaving a fiery trail in the sky spotted by multiple people in Florida
• Navy pilot who filmed USS Nimitz UFO encounter breaks his silence after 15 years – Tic Tac craft broke laws of physics
• UFO that ‘nearly hits’ a SpaceX satellite during live stream is ‘100% proof aliens are watching,’ says expert
• Top researchers claim U.S. military is covering up their own super advanced aircraft by making people believe it is a UFO
• Mysterious hovering orbs over Mesa have many believing they spotted a glowing UFO
• UFO seen by 100+ people hovering in the California sky for five minutes sparks alien concerns
• A stationary UFO recorded in the South Carolina sky sparks secret government surveillance theory
• Former head of MI6, who’s allegedly part of a secret global conspiracy on UFOs, says he believes aliens do exist
• UFO expert claims ISS video is ‘100% proof’ NASA, Russia know aliens visit the space station
• Bug expert declares there are insects on Mars and then suddenly deletes research after backlash
• UFO expert claims to have video proof of a fleet of alien spaceships passing by our moon
• 5 Navy veterans and new anonymous source who witnessed the USS Nimitz UFO incident come forward to reveal what they saw
• Retired Air Force Major says a space alien was shot and killed at a base in 1978, government covered it up
• US Navy pilot David Fravor who claims to have witnessed a UFO says the tapes of the encounter have disappeared
• Eyewitnesses spot identical fleet of UFOs in the sky over Utah and North Carolina in the same day
• UFO expert says he has ‘100% proof’ that aliens currently live in a ‘city’ on our moon
• Red triangular craft recorded hovering in the Texas sky is perhaps the ‘clearest UFO footage’ ever
• Top Gun Navy pilot describes his incredible UFO encounter on ‘The Joe Rogan Experience’
• A strange ‘fleet’ of 14 glowing UFOs was spotted and caught on camera off the coast of North Carolina