UFO Hunters Claim They Are Behind The Unexplained Group Of Colorado Drones, Mystery Remains Unsolved 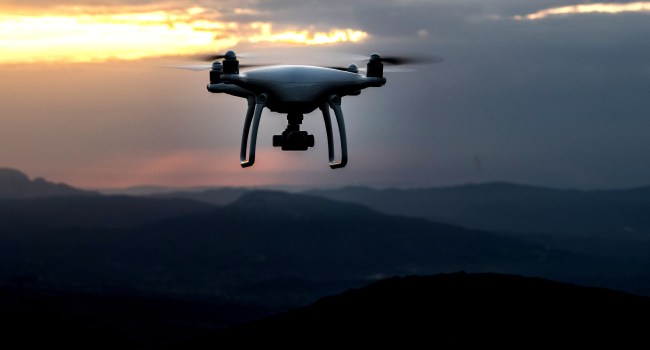 Just prior to the new year, residents of Colorado, including the police, were left baffled by reports of mysterious and unexplained “swarms” of drones flying in formation across the state.

No one had an explanation for what these drones were doing or who was controlling them, but Phillips County Sheriff Thomas Elliott reported to the Denver Post, “They’ve been doing a grid search, a grid pattern. They fly one square and then they fly another square.”

Representatives of the Federal Aviation Administration, Air Force, Drug Enforcement Administration, and U.S. Army Forces Command all claimed to have no idea what was happening.

Fast forward several weeks and sure enough, the drones were still out there doing whatever it is they’re doing and despite an investigation by the Colorado Department of Public Safety (CDPS), there were still no answers to be found.

“While I can’t conclusively say we have solved the mystery, we have been able to rule out a lot of the activity that was causing concern,” CDPS executive director Stan Hilkey told ABC-7 Denver. “We will continue to remain vigilant and respond as new information comes in.”

Skip ahead another week and United States Air Force intelligence expert Mike Turber told Daily Star Online, “I’ve seen several videos that have gotten me into this. I’m a debunker and I’ve never jumped on the UFO bandwagon. But as I’m watching these videos, I’m seeing some objects that look a lot like a tic-tac would be. There’s one where an aircraft is zooming by at a ridiculous speed. As far as I know, they very well could be these tic-tacs but I have no inside knowledge of what these are and can’t really confirm anything.”

So are the drones people are seeing in Colorado the same UFOs spotted by Navy fighter pilots from the USS Nimitz in November 2004?

Not if you believe a group of UFO hunters based out of Wichita, Kansas who are now claiming responsibility for the mysterious Colorado drone sightings.

The group, known as ArchAngleRECON, claims they have been flying drones in formation over Colorado in an organized search for the tic-tac UFO seen by USS Nimitz pilots as well as another craft they believe was flying underneath it.

Michael Spicer of ArchAngleRECON told the Sterling Journal-Advocate that he was contacted recently by the Federal Aviation Administration’s Investigations and Law Enforcement Assistance Program.

Despite Spicer’s statements, there is still some who have doubts, and rightfully so, that his group of drones is actually the same group that he been spotted repeatedly in the Colorado skies.

One thing is for certain however, and that is…

Previously…
• Ominous black ring cloud hovers in the sky above Pakistan
• Glowing UFO spotted on NASA live stream of the Space Station sparks more claims aliens are real
• Newly declassified CIA intelligence report reveals new info about 1973 UFO sighting at ‘Site 7’ in Russia
• Navy admits it has additional ‘top secret’ footage of USS Nimitz UFO encounter but won’t release it
• UFO sighting? Mysterious object leaving a fiery trail in the sky spotted by multiple people in Florida
• Navy pilot who filmed USS Nimitz UFO encounter breaks his silence after 15 years – Tic Tac craft broke laws of physics
• UFO that ‘nearly hits’ a SpaceX satellite during live stream is ‘100% proof aliens are watching,’ says expert
• Top researchers claim U.S. military is covering up their own super advanced aircraft by making people believe it is a UFO
• Mysterious hovering orbs over Mesa have many believing they spotted a glowing UFO
• UFO seen by 100+ people hovering in the California sky for five minutes sparks alien concerns
• A stationary UFO recorded in the South Carolina sky sparks secret government surveillance theory
• Former head of MI6, who’s allegedly part of a secret global conspiracy on UFOs, says he believes aliens do exist
• UFO expert claims ISS video is ‘100% proof’ NASA, Russia know aliens visit the space station
• Bug expert declares there are insects on Mars and then suddenly deletes research after backlash
• UFO expert claims to have video proof of a fleet of alien spaceships passing by our moon
• 5 Navy veterans and new anonymous source who witnessed the USS Nimitz UFO incident come forward to reveal what they saw
• Retired Air Force Major says a space alien was shot and killed at a base in 1978, government covered it up
• US Navy pilot David Fravor who claims to have witnessed a UFO says the tapes of the encounter have disappeared
• Eyewitnesses spot identical fleet of UFOs in the sky over Utah and North Carolina in the same day
• UFO expert says he has ‘100% proof’ that aliens currently live in a ‘city’ on our moon
• Red triangular craft recorded hovering in the Texas sky is perhaps the ‘clearest UFO footage’ ever
• Top Gun Navy pilot describes his incredible UFO encounter on ‘The Joe Rogan Experience’
• A strange ‘fleet’ of 14 glowing UFOs was spotted and caught on camera off the coast of North Carolina