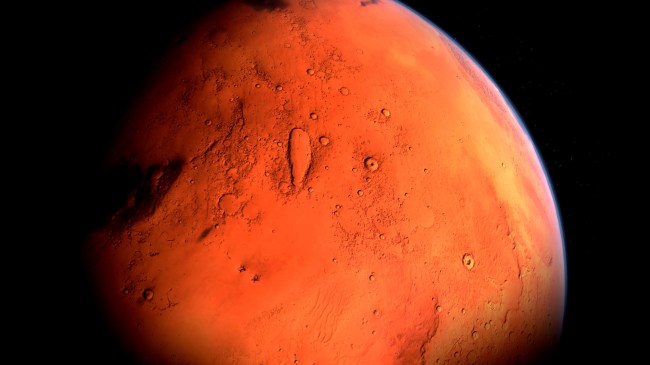 Naysayers have been trying to claim that the recent flurry of UFO sightings can be attributed to people having a lot more time on their hands thanks to the self-isolation directives everyone has been following.

Others believe it’s because aliens have been checking up on various parts of the planet to see how humans have been dealing with the pandemic that they may or may not have unleashed on the planet.

Regardless of which camp people fall in, there is one thing they can all agree on: recent discoveries of alien pyramids, bases, a monolith, and a crashed aircraft spotted on the surface of Mars has nothing to do with what’s happening here on Earth.

Twice over the past week, prominent UFO and alien expert Scott Waring has spotted what he believes to be even more proof of intelligent extraterrestrial life on the red planet.

His first discovery came as he was looking through the NASA Mars photo index from the Mars Global Surveyor missions and “found an unusual structure.”

Writing on his web site, Waring stated, “I believe the photo was taken in 1999 and shows a huge rectangular structure with a large opening in it. The opening seems to go below the ground, which leads me to think there is an underground alien base here…or at least there was once long ago.

“To the right of the structure is a very unique ship thats docked inside of a crater. The ship has layers and long coming out of its front and top…kid of like a telescope coming out of submarine. They are docked inside the crater to give it some saftey from both detecting and micrometeorites. The micrometeorites wont hurt the ship, but if repairs are being made, it may injure those doing the repairs.”

His second discovery, an ancient artifact on the surface of Mars, came courtesy of a Mars and NASA image investigator who goes by the handle IC Devices on YouTube.

“The object in question is folded and has three layers with a baseball size sphere sitting on the top layer,” Waring writes. “The objects color looks different from the color of its surroundings. It looks grey, metallic in appearance. Another strange thing is the original link to this was deleted by NASA. This is a remarkable find, and had this been discovered in an ancient Aztec or Mayan dig site…there would be no question about it being made by intelligent beings.”

Did you catch that? “The original link to this was deleted by NASA.” Very interesting…