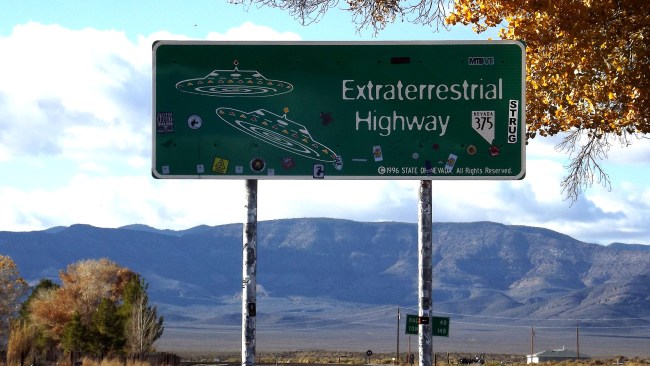 Back in December of 2019, Planet Labs’ satellite photos showed a dozen unusual objects emerging from several rows of hangars at the top secret Area 51-affiliated Tonopah Test Range Airport. Nothing ever came of those photos, so the mystery withered away a bit.

That is, until it happened again last week.

Spotted by Area 51 expert Tyler Rogoway on March 2nd, the previously under-utilized Tonopah Test Range was once again buzzing as the mysterious objects in question re-appeared for the first time since December.

So what exactly are these unidentified objects? Are they aircraft? Spacecraft? Alien spacecraft?!

In imagery we obtained exclusively from Planet Labs, their three-meter resolution Planet Scope imaging satellites picked up what appears to be a number of objects sitting in front of, or at least poking out of, the same dozen hangars as before. Some of the objects appear to be quite large, with the morning light casting their shadow.

On the north-end of Tonopah’s long hangar-filled ramp, referred to by those who have worked on the base as ‘canyons,’ what are very likely three Air Force Special Operations Command CASA CN-235s sit. These aircraft, along with contractor-operated ones, are regular visitors to this part of the base. You can compare these aircraft to the shadows cast by some of the objects in front of the hangars. The CN-235s are roughly 70 feet long.

“As to what these objects are, we do not know,” Rogoway added.

In October of 2019, Rogoway also reported on a censored craft near one of these hangars that appeared in a satellite image of the Tonopah Test Range Airport.

The image is interesting on two levels. First off, what exactly are we looking at? It’s hard to tell, but it certainly looks like an aircraft. To us it resembles a flying wing and is very similar to the RQ-170’s planform. The light color would also match. The only difference is that this aircraft appears to have a wingspan approaching 80 feet, which is significantly larger than that of the RQ-170. So in that sense, this aircraft would be somewhere between an RQ-170 and the P175 Polecat in terms of proportions. This is the size of vehicle that we have posited to have existed for some time — a ‘Super Sentinel’ of sorts that is capable of performing strike and electronic attack missions.

Rare shot of an F-117 rolling out from the canyons and toward the gated taxiway at Tonopah Test Range Airport. It's funny, the hangar right to the rear right-hand side of the F-117's tail is the where this mystery craft popped up on Google Earth recently: https://t.co/mRdX5ApZjo pic.twitter.com/NroytQMNHo

The photo, dated Oct. 1, 2017 and attributed to Digital Globe, has clearly been touched-up to conceal the details of the aircraft seen in front of the hangar. Usually, personnel at sites that work with sensitive hardware like secret aircraft are very aware of the schedules of imaging satellites that pass overhead. Test schedules and even the movement of an aircraft from one hangar to another can be dictated by the satellites’ predictable orbital paths. But no system is perfect and the need to conceal test articles or even semi-operational aircraft from overhead view is also dictated by the sensitivity of the asset. We have no idea what exactly happened here, but clearly, corrective action was taken after the satellite’s shutter had snapped open and close.

Again we ask, what are these mysterious objects? Some day, hopefully soon, we will know because….

Previous evidence and observations…
• Secret Area 51 tunnel openings discovered on Google Earth, are they UFO hangar entrances?
• Google Earth shows ‘an example of an alien abduction taking place’ near Fiji, says UFO expert
• NASA live cam catches UFO flying near International Space Station on video
• USS Nimitz technician technician allegedly forced to sign NDA after witnessing Tic-Tac UFO from Navy spy plane
• ‘Fleet of UFOs’ hovering over Arizona captured on video
• Darting UFO recorded on NASA live stream shows ‘proof’ the International Space Station is being watched
• Mind-blowing new book puts forth theory that UFOs may actually be crafts piloted by time-traveling humans
• UFO hunters claim they are behind the unexplained group of Colorado drones, mystery remains unsolved
• Ominous black ring cloud hovers in the sky above Pakistan
• Glowing UFO spotted on NASA live stream of the Space Station sparks more claims aliens are real
• Newly declassified CIA intelligence report reveals new info about 1973 UFO sighting at ‘Site 7’ in Russia
• Navy admits it has additional ‘top secret’ footage of USS Nimitz UFO encounter but won’t release it
• UFO sighting? Mysterious object leaving a fiery trail in the sky spotted by multiple people in Florida
• Navy pilot who filmed USS Nimitz UFO encounter breaks his silence after 15 years – Tic Tac craft broke laws of physics
• UFO that ‘nearly hits’ a SpaceX satellite during live stream is ‘100% proof aliens are watching,’ says expert
• Top researchers claim U.S. military is covering up their own super advanced aircraft by making people believe it is a UFO
• Mysterious hovering orbs over Mesa have many believing they spotted a glowing UFO
• UFO seen by 100+ people hovering in the California sky for five minutes sparks alien concerns
• A stationary UFO recorded in the South Carolina sky sparks secret government surveillance theory
• Former head of MI6, who’s allegedly part of a secret global conspiracy on UFOs, says he believes aliens do exist
• UFO expert claims ISS video is ‘100% proof’ NASA, Russia know aliens visit the space station
• Bug expert declares there are insects on Mars and then suddenly deletes research after backlash
• UFO expert claims to have video proof of a fleet of alien spaceships passing by our moon
• 5 Navy veterans and new anonymous source who witnessed the USS Nimitz UFO incident come forward to reveal what they saw
• Retired Air Force Major says a space alien was shot and killed at a base in 1978, government covered it up
• US Navy pilot David Fravor who claims to have witnessed a UFO says the tapes of the encounter have disappeared
• Eyewitnesses spot identical fleet of UFOs in the sky over Utah and North Carolina in the same day
• UFO expert says he has ‘100% proof’ that aliens currently live in a ‘city’ on our moon
• Red triangular craft recorded hovering in the Texas sky is perhaps the ‘clearest UFO footage’ ever
• Top Gun Navy pilot describes his incredible UFO encounter on ‘The Joe Rogan Experience’
• A strange ‘fleet’ of 14 glowing UFOs was spotted and caught on camera off the coast of North Carolina