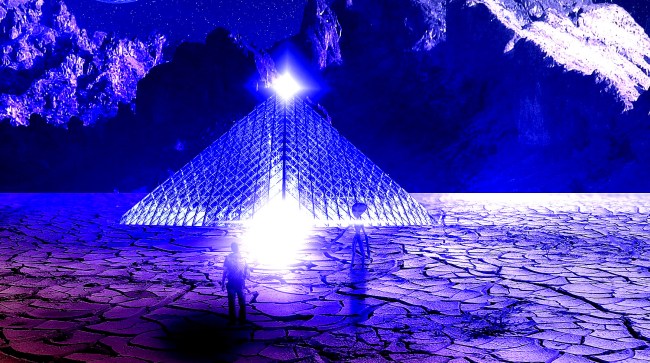 The increased prevalence of UFO sightings and evidence of alien existence these days can largely be attributed to the rise in technology, and in particular the internet, computers and smartphones.

Prior to this period of technological enlightenment, all people had to go on were third party accounts, news reports, and perhaps some grainy footage taken with cameras that by today’s standards were prehistoric.

Now, however, the truth about extraterrestrial life is closer to being revealed than ever before, thanks to the efforts of people who have schooled themselves in this ever-growing field of investigation.

One of those people who has been relentless in his pursuit of the truth using these 21st century tools is UFO and alien expert Scott Waring.

Waring’s efforts of late have mostly been focused on searching for evidence of alien life on the planet Mars. However, he also studies other areas of interest when it comes to extraterrestrial discovery, such as the arctic regions of Earth.

This week, Waring was scrutinizing Lavoisier Island on Google Earth when he discovered what he believes to be “proof of ancient aliens.”

“I was looking over an island in the Antarctic region when I came across a TR3B craft,” Waring wrote on his web site. “The triangle craft has a hump in the middle and a thicker edge with three sides. It looks metallic and it’s sitting in an area which appears to be the location of an ancient alien base. This craft was revealed after warm years had melted the ice and snow revealing the secret craft below. This is 100% evidence that aliens have lived on Earth long before humanity ever made cites.”

Commenters on a video where he describes his discovery were blown away.

“I really do feel that something strange and otherworldly is happening in that region of Antarctica,” wrote on viewer.

Another commenter took it several steps further, writing, “I think that NASA/JPL and associates all know that the ancient tri-shaped craft is there, Scott, but they don’t want to retrieve it because of possible regional geophysical land dangers that retrieval teams might encounter … not to mention the ‘Human Animal Hybrid Beings’ such as the alleged ‘Yeti aka Big Foot Creatures’ possibly inhabiting that region that they might encounter. Unless they brought with the retrieval team a battalion of special forces operatives and assorted hi-powered weaponry to fight, disable and/or kill them all off and away from the craft to be retrieved, which it seems, would be a waste of secret government money, materials and quite possibly mortal human lives!”

Are these people on to something? Will the government ever reveal what it knows and has been hiding for decades?

Previous news and evidence…
• Mass UFO sighting in the skies above Detroit and Cleveland on consecutive nights has people shook
• UFO expert Tom DeLonge shares strange video of a huge ‘fiery orange’ orb dancing about the sky over California
• Flurry of UFO sightings, including a ‘Tic Tac’ spotted by a pilot over Mexico, sparks more speculation
• Top quantum physicist believes USS Nimitz UFO used ‘metamaterial’ and time-traveled to reach 19,000 mph
• Time-lapse video showing mysterious ‘red trails’ reignites debate about UFOs over North Carolina
• Former UK Ministry Of Defence UFO investigator says we are completely unprepared for an alien invasion
• ‘Black Triangle’ UFO spotted orbiting the sun on NASA video: ‘This is an alien space station’
• UFO sighting is ‘absolute proof’ a Mexican volcano is being used as a secret alien base of operations
• Satellite photos spot mysterious objects emerging from top secret Area 51 experimental air base
• Secret Area 51 tunnel openings discovered on Google Earth, are they UFO hangar entrances?
• Google Earth shows ‘an example of an alien abduction taking place’ near Fiji, says UFO expert
• NASA live cam catches UFO flying near International Space Station on video
• USS Nimitz technician technician allegedly forced to sign NDA after witnessing Tic-Tac UFO from Navy spy plane
• ‘Fleet of UFOs’ hovering over Arizona captured on video
• Darting UFO recorded on NASA live stream shows ‘proof’ the International Space Station is being watched
• Mind-blowing new book puts forth theory that UFOs may actually be crafts piloted by time-traveling humans
• UFO hunters claim they are behind the unexplained group of Colorado drones, mystery remains unsolved
• Ominous black ring cloud hovers in the sky above Pakistan
• Glowing UFO spotted on NASA live stream of the Space Station sparks more claims aliens are real
• Newly declassified CIA intelligence report reveals new info about 1973 UFO sighting at ‘Site 7’ in Russia
• Navy admits it has additional ‘top secret’ footage of USS Nimitz UFO encounter but won’t release it
• UFO sighting? Mysterious object leaving a fiery trail in the sky spotted by multiple people in Florida
• Navy pilot who filmed USS Nimitz UFO encounter breaks his silence after 15 years – Tic Tac craft broke laws of physics
• UFO that ‘nearly hits’ a SpaceX satellite during live stream is ‘100% proof aliens are watching,’ says expert
• Top researchers claim U.S. military is covering up their own super advanced aircraft by making people believe it is a UFO
• Mysterious hovering orbs over Mesa have many believing they spotted a glowing UFO
• UFO seen by 100+ people hovering in the California sky for five minutes sparks alien concerns
• A stationary UFO recorded in the South Carolina sky sparks secret government surveillance theory
• Former head of MI6, who’s allegedly part of a secret global conspiracy on UFOs, says he believes aliens do exist
• UFO expert claims ISS video is ‘100% proof’ NASA, Russia know aliens visit the space station
• Bug expert declares there are insects on Mars and then suddenly deletes research after backlash
• UFO expert claims to have video proof of a fleet of alien spaceships passing by our moon
• 5 Navy veterans and new anonymous source who witnessed the USS Nimitz UFO incident come forward to reveal what they saw
• Retired Air Force Major says a space alien was shot and killed at a base in 1978, government covered it up
• US Navy pilot David Fravor who claims to have witnessed a UFO says the tapes of the encounter have disappeared
• Eyewitnesses spot identical fleet of UFOs in the sky over Utah and North Carolina in the same day
• UFO expert says he has ‘100% proof’ that aliens currently live in a ‘city’ on our moon
• Red triangular craft recorded hovering in the Texas sky is perhaps the ‘clearest UFO footage’ ever
• Top Gun Navy pilot describes his incredible UFO encounter on ‘The Joe Rogan Experience’
• A strange ‘fleet’ of 14 glowing UFOs was spotted and caught on camera off the coast of North Carolina