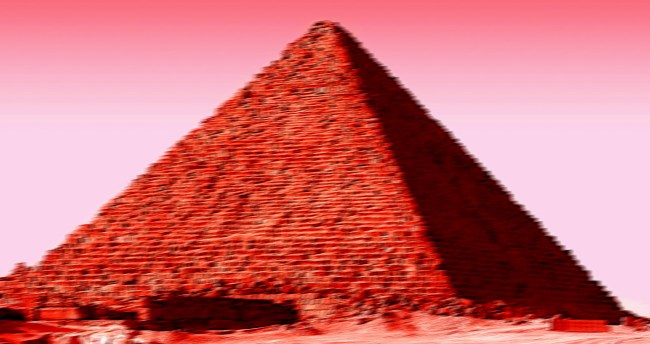 The search for proof of the existence of extraterrestrials, especially alien life on the planet Mars, has really been heating up of late.

Earlier this week, a UFO expert spotted what he believes are two alien “bases” on a Google Mars map image.

Just prior to that we had an “alien monolith” originally spotted by NASA astronaut Buzz Aldrin on Mars moon appear in a European Space Agency image, and a NASA photo of Mars which looked “very much like a crashed aircraft” identical to a crash in Roswell.

Now, one of the most prolific UFO and alien experts on the internet, Scott Waring, believes that he has spied what he calls “two ancient pyramids” on the surface of the red planet.

“Both pyramids are close to one another and they both have entrances facing the NASA rover camera,” he wrote on his web site. “They look ancient but have survived the test of time. Both pyramids are about three meters tall by five meters wide. A smaller species than us humans for sure, but nevertheless…an intelligent species.”

The photo, which appears on MidnightPlanets.com, marks the second time in less than a week that Waring has noticed pyramids on the surface of Mars along with other alien structures.

This also isn’t the first time, or first location, that a mysterious pyramid-shaped structure has been observed in outer space.

Back in 2015, NASA’s Dawn spacecraft captured an image of a unidentified structure three miles tall on the surface of the dwarf planet Ceres, the largest object in the main asteroid belt that lies between the orbits of Mars and Jupiter, according to NASA.

So now the real question is, are aliens creating these pyramid-like structures on the surfaces of Mars and Ceres?