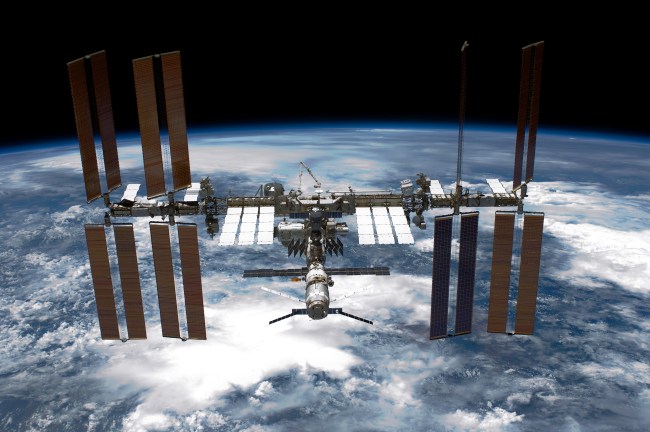 NASA has a wonderful YouTube channel chock full of interesting videos as well as live feeds from the International Space Station. There are UFOlogists who monitor the ISS and look for anything out of the ordinary, including alien spaceships. On Saturday, something was spotted on the ISS live feed.

“I was watching the NASA live space station cam when I noticed the camera zooming in on a strange object coming from below the space station,” Waring said. “At first I thought it was a capsule or satellite, but its speed increased, and after 22 minutes it shot up and into deep space.”

“I believed if it was a capsule it would have gone into low earth orbit then lower to land,” he added. “But when this object shot upward into deep space, it literally blew my mind. This could be USAF top-secret alien tech fused craft, but I don’t think so, the person on the camera seemed dismayed and unprepared for its sudden appearance.”

RELATED: Apollo 11 Astronaut Michael Collins Reveals He Believes There Is Alien Life Out There In Space

Last month, Waring shared photos from the ISS of a glowing object.

In 2016, a UFO hunter spotted a strange light flying near Earth. Suddenly, the NASA live feed was cut off. NASA said that the object was not a UFO, but rather space junk, a reflection or light from Earth.

On August 19, 2013, NASA astronaut Chris Cassidy spotted an unidentified object floating outside the ISS. Russia said it was not aliens, but actually an antenna cover that broke free from the Zvezda service module.

Other astronauts who said they have seen unusual occurrences in space include Gemini 4 pilot Jim McDivitt who spotted something in June of 1965 with a “white cylindrical shape with a white pole sticking out of one corner of it.” The object was most likely debris from the Titan II rocket.

Buzz Aldrin said that he may have seen a UFO during the Apollo 11 mission.

“On Apollo 11 en route to the Moon, I observed a light out the window that appeared to be moving alongside us,” Buzz said. “There were many explanations of what that could be, other than another spacecraft from another country or another world — it was either the rocket we had separated from, or the 4 panels that moved away when we extracted the lander from the rocket and we were nose to nose with the two spacecraft.”

“So in the close vicinity, moving away, were 4 panels,” Aldrin added. “And I feel absolutely convinced that we were looking at the sun reflected off of one of these panels. Which one? I don’t know. So technically, the definition could be unidentified.”

NASA astronaut Leland Melvin said he saw “something organic/alien like floating out of the payload bay” during a space operation.

Here is the NASA ISS live cam, so maybe you can spot an Unidentified Aerial Phenomena (UAP).

RELATED: Britain’s First Astronaut Says Aliens Definitely Exist And They Could Already Be Among Us