‘Fleet Of UFOs’ Hovering Over Arizona Captured On Video 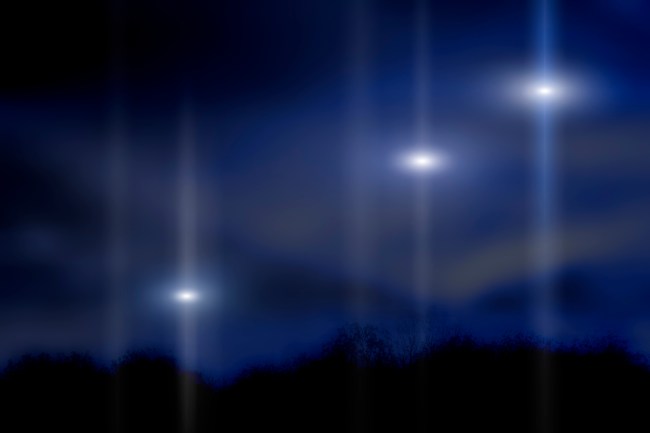 A video has emerged showing six bright lights hovering in the skies over Yuma, Arizona. The fleet of UFOs seems to be in a tight formation and suspended in mid-air, not moving or falling.

The UFO footage was posted by YouTube channel willease, and publicized by UFOlogist Scott C. Waring’s ET Data Base. Waring believes that the video shows a “fleet of UFOs.” The video is captioned: “Unusual Flying Objects over Yuma, Arizona.”

The glowing lights go from six to three, then assemble in a triangle formation. Then, one-by-one, they disappear.

What are those! Are they aliens? Are they a fleet of UFOs? Possibly. Another possibility is far less exciting.

The video was taken near the Marine Core Air Station in Yuma. The light seen hovering in the sky may have been the Air Force dropping flares. But they do stay motionless in the sky for a good amount of time, then last seen in a triangle formation, something UFO hunters have spotted in the past.

The YouTube account willease also posted another strange video of glowing lights in the sky. The UFO sighting came from tourists in the Mojave Desert. There were three bright lights in a triangle formation in front of a mountain range. Then, one-by-one, the glowing orbs vanish.

In 2013, there was a UFO sighting in Rapid City, South Dakota, that had three bright lights in the sky in a triangle formation.

Last October, there was a triangle-shaped UFO spotted in Texas.

RELATED: Mysterious Hovering Orbs Over Mesa Have Many Believing They Spotted A Glowing UFO

In August 2019, there were multiple sightings of a black triangular-shaped UFO over the skies over the Portland area. The aircraft was seen near the Portland Air National Guard Base (PANG), which prompted many conspiracy theories that it wasn’t an alien spaceship, but a U.S. military spy plane.

Many conspiracy theorists believe the triangle ship is the TR-3B, a long-rumored top-secret United States Air Force spy plane. The TR-3 Black Manta is said to be a surveillance plane that is alleged to be a USAF black project.

Earlier this month, a Colombian commercial airline pilot by the name of “Cesar” posted a video of an unidentified flying object high in the atmosphere. While flying over Medellin in the Viva Air Airbus A320s, Cesar captured a video of a metallic cube floating in the air. The UFO doesn’t have a balloon, wings, propellors, or exhaust.

There was a massive rise in the number of UFO sightings in North America in 2019. The National UFO Reporting Center, which tracks calls and messages from people around the U.S. and Canada about unexplained objects in the sky, said that it had received 5,971 sightings in 2019. That is a considerable jump from 2018 when there were 3,395 UFO sightings.

The state with the most UFO sightings in 2019 was California, with 485, followed by Florida, with 385 sightings. Washington state had 222 reports of UFOs last year.