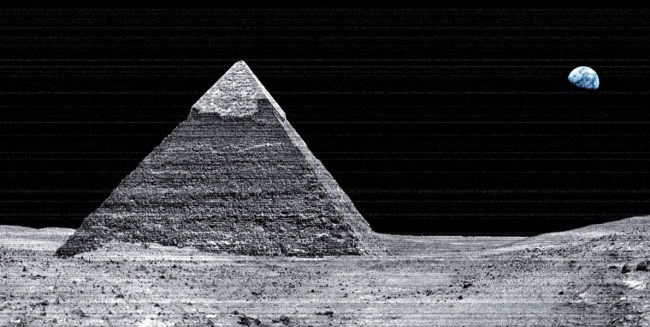 Hot on the heels of The Pentagon finally releasing three of the unclassified UFO videos taken by Navy pilots in 2004 and again in 2015 and recently verified as authentic by the United States Defense Department, we’ve got more proof of alien existence.

Sue Gough, spokesperson for the U.S. Defense Department, said about the videos, “After a thorough review, the department has determined that the authorized release of these unclassified videos does not reveal any sensitive capabilities or systems, and does not impinge on any subsequent investigations of military air space incursions by unidentified aerial phenomena.”

“Unidentified aerial phenomena…” Is that code for aliens?

I ask that question because UFO expert Scott Waring has found even more evidence of extraterrestrial activity. This time on the Earth’s moon.

This isn’t the first time Waring has found of proof of an alien presence on the moon either.

Seven months ago, he discovered what he believes is an “alien city” in an archived NASA photo of the moon’s poles.

Five months ago, Waring discussed a fleet of UFOs that were caught on video by an amateur astronomer flying past our moon.

Three months ago, he discovered another ancient alien city on the moon.

And now, this week, he says he has uncovered “100% indisputable proof alien cities exist on Earth’s moon.”

That there is a pretty strong statement.

Writing on his web site, Waring states, “I was looking at some Lunar Orbiter photographs when I came across a few that I had not see before. They partially reveal the dark side of the moon, or almost dark side because Earth cannot view this part of the moon, but a little sun light does hit part of it. The white dots, which so many inexperienced people have called photo flaws, are real. My proof is the shadow. Look at the shadow covering them.”

“Moon shadows would not affect photo flaws, however if they were structures on the moon, it would [be] logical,” he continued. “To argue that photo flaws would disappear in the shadows is ridiculous so I will not acknowledge such foolishness. You will notice like I did that there is some unusual formations of white dots. These are evenly spaced apart and stay close to one another. That is because you are looking at cities on the moon.”

He goes on to explain that based on the photographs he viewed he was able to identify three different types of buildings on the moon.

First is the metallic buildings which have angles like human buildings, but these are always smaller compared to the other two. Second are the white ceramic buildings. These will have black windows, yet the surface of the building is so shiny that it looks like light reflecting off the surface. Their shape is usually round or oval, never with sharp angles, always smooth edges. … Third are the dark buildings. These are the most unusual and seem biomechanics or living structures that were grown. These are flat black, meaning they have no reflective surfaces. They are massive, up to hundreds of kilometers long. They often have the small buildings near their entrances with many (4-8 usually) tunnel like attachments going back and forth.

Has he finally found indisputable proof of alien existence as he claims?

“I used to believe in NASA, held them up on a pedestal with the highest of admiration, but then I discovered they lied to us and I can never respect someone that lies to your face,” Waring states, full with the knowledge that…