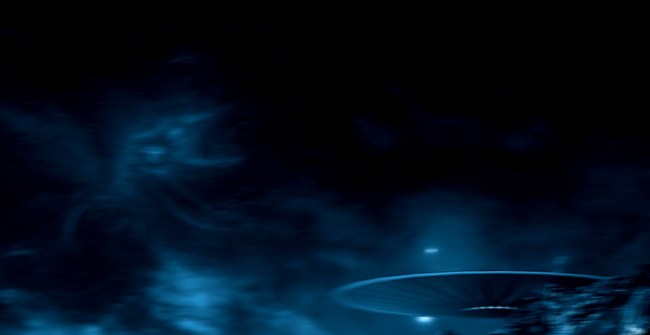 Over the years, alien hunters have pinned down numerous “hot spots” for UFO sightings: off the coast of Greece, multiple active volcanoes, the International Space Station, Mars, and the moon.

Another recent focus of alien attention, for obvious reasons, has been the recent SpaceX rocket launches.

Back in December, a UFO “nearly hit” a SpaceX satellite during a live stream, leading one expert to state it was “100% proof aliens are watching.”

Fast forward to May 24, 2020, and we’ve got another UFO sighting surrounding a SpaceX Starlink satellite launch.

“I noticed that when SpaceX was releasing some Starlink satellites, multiple white firefly objects flew past in the upper left hand corner of the screen,” wrote prolific UFO and alien expert Scott Waring on his website.

“I heard about such objects from an old report from Astronaut John Glenn when he was orbiting earth for the first time in history, these small white fluttering glowing objects flew around his module and even landed on it.

“He hit the inside of the hull and they flew off in mass and flew away. He called them fireflies.”

Glenn explained what he meant by seeing “fireflies” as he was circumnavigating the globe three times back in 1962.

“This is Friendship Seven. I’ll try to describe what I’m in here,” Glenn told CAPCOM. “I am in a big mass of some very small particles that are brilliantly lit up like they’re luminescent. I never saw anything like it. They round a little; they’re coming by the capsule, and they look like little stars. A whole shower of them coming by.

“They swirl around the capsule and go in front of the window and they’re all brilliantly lighted. They probably average maybe 7 or 8 feet apart, but I can see them all down below me, also.

When CAPCOM asked if he could hear them making any impact with his capsule, Glenn replied, “Negative, negative. They’re very slow; they’re not going away from me more than maybe 3 or 4 miles per hour. They’re going at the same speed I am approximately. They’re only very slightly under my speed. Over. They do, they do have a different motion, though, from me because they swirl around the capsule and then depart back the way I am looking.”

Former NASA scientist, James Oberg, who worked in Mission Control, believes UFO sightings similar to Glenn’s and the one on May 24, 2020 are nothing more than “a bunch of space dandruff” — i.e. ice flakes and crystals or other small pieces of nondescript matter that may have shed themselves from the space craft the astronaut is occupying.

Oberg adds that our puny human brains are only used to viewing relatively slow-moving objects and that it’s “visually confusing” for our minds to deal with the speed, light and atmosphere of space.

Believe what you want to believe, but know one thing is certain…