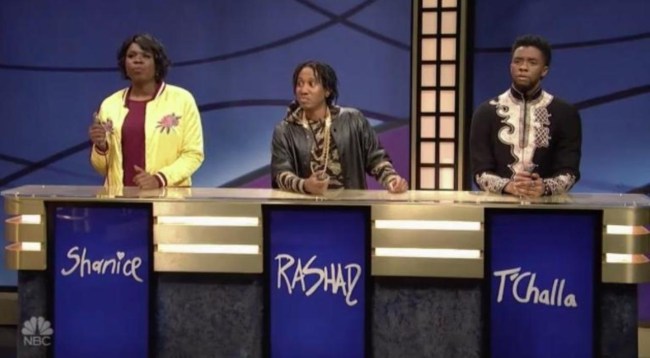 Black Panther will accomplish another milestone this weekend as it will become the third-highest grossing movie of all-time, knocking 1997’s Titanic out of the #3 top spot in the U.S. box office. As of Friday, Black Panther had grossed $1.29 billion worldwide and a domestic total of $659.3 million. The film is expected to eclipse Titanic‘s $659.5 million by the end of the weekend. Ahead of Black Panther in the top domestic box office is only Star Wars: The Force Awakens with $936.7 million and Avatar with $760.5 million. Black Panther became the highest-grossing superhero film ever after surpassing The Avengers, which made $624 million. Chadwick Boseman, the star of Black Panther, hosted Saturday Night Live this week where his character T’Challa appeared on Black Jeopardy.

SNL‘s recurring Black Jeopardy sketch had royalty in the building as the king of Wakanda attempted to answer questions from the game show’s host, Darnell Hayes played by Kenan Thompson. This week’s categories included “Grown Ass,” “Aw Hell Naw,” “Fid’na,” “Girl, Bye,” “I Ain’t Got It,” and “White People.” However, the king of a fictional country in Africa soon found himself struggling to provide correct answers because of many cultural differences.

T’Challa found many differences in the two cultures and struggled with several questions about police officers and finance. In the end, T’Challa does get the correct answer when it comes to potato salad. Check out the hilarious SNL skit below.