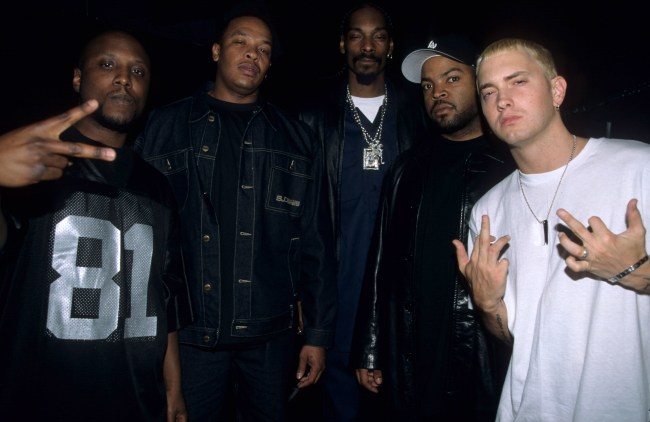 Most Rap fans would put Eminem on their list of the Top 10 Rappers Ever. This isn’t out of the ordinary. There are a lot of people who would put him at #1 and that could be a controversial take. But to leave him out of the Top 10 entirely requires some explaining, especially when it’s Snoop Dogg who is saying Eminem isn’t on his list of the top 10 rappers ever.

That’s legit news right there. The people want to know why Snoop doesn’t think Eminem is a Top 10 rapper and Snoop Dogg didn’t hold back with his answer, he also managed to praise Eminem at the same time while still keeping him off his list.

This controversial take from Snoop Dogg came during a recent Breakfast Club interview. Here’s the clip with the full interview below:

Eminem is not even in Snoop's top ten rappers of all time. Agree or Disagree? pic.twitter.com/nRG1MwwlpB

Snoop Dogg says Eminem is not in his Top 10 list pic.twitter.com/Gptvq4Ervv

“Eminem! The Great White Hope! White rappers had zero respect in rap. Let’s keep that one thou wow. [Dr. Dre] has probably put Eminem in the position where he could be labeled as one of the top ten rappers ever. I don’t think so, but the game thinks that he’s top ten lyricists and all that that comes with it. That’s just because he’s with Dr. Dre and Dr. Dre helped him find the best Eminem that he could find.”

He was then pressed on why Eminem didn’t make his list of the Top 10 Rappers ever and Snoop had this to say:

Snoop Dogg is unimpeachable. He is on the Mt. Rushmore of the Greatest Rappers of All-Time. So for him to come out and say that Eminem isn’t on his list of the 10 greatest was shocking and fans were certainly taken aback by this news. Most refusing to believe this take from Snoop is legit because Snoop has praised Eminem in the past.

I have seen Snoop talk in a different vibe about Eminem always. So, I don't know wtf is this. But whatever it is, this is not the right way. I don't give a f about his list but everything else is disrespectful. 😤
Eminem would have never talked like this if he was in his place.👇 https://t.co/AHY3uoIbau

I agree there are way greater old school rappers that Eminem cannot fuck with…. Not on my top 10 as well. https://t.co/AJvF4Vklzx

Doing their hardest to demote eminem on the list of greatest rappers. He’s top 10 at the very least. More elite rappers than snoop have said so. https://t.co/xeVsRNwVyR

his list don't care, the em stans in the replies are weird https://t.co/KJGDnaYFRo

Probably the most respectable answer I’ve ever heard to why Eminem wouldn’t be in a top 10 🤔 https://t.co/Enh38sJJkE

Snoop is aging 😏😏😏….anyway it's his opinion because Rakim in an interview said Eminem is one of his favorite rappers of all time. https://t.co/bYOk0j4LNh

What I’m seeing from most of the responses on Twitter is that Eminem fans feel personally attacked by this take from Snoop Dogg. It’s almost as if they feel like Snoop is calling their opinions invalid without realizing he’s just giving his own take. I get this. I’ve been outraged in the past when Rolling Stone repeatedly doesn’t give Phish and Trey Anastasio the credit they deserve.

Some of these Em stans out there just need to chill though.

If you want to watch the full hour-long Breakfast Club with Snoop you can check that out here: