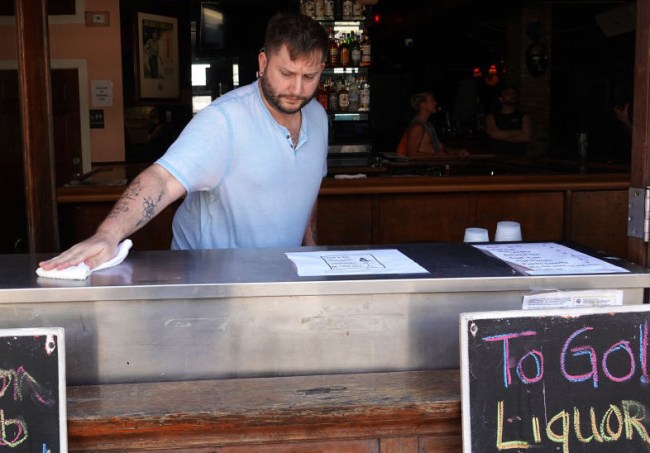 I may not have a sign hanging on the wall of my apartment like companies in an industry where accidents happen so often that you have to keep your employees posted on how long it’s been since you’ve had one, but last month, my mental “Days Since I’ve Had A Drink At A Bar” counter reached the highest number it ever has stretching back to the day I first acquired an ID capable of allowing me to enter a drinking establishment.

The world was a very different place on March 8, 2020, which is when I woke up in dire need of the entire coat of the dog that had bitten me the previous night. I used the part of my brain that wasn’t in a severe amount of pain to debate how concerned I should be with the menace that was becoming increasingly threatening on a daily basis,  but after much deliberation, I decided I was much more concerned with finding a place where I could have orange juice poured into various alcoholic beverages.

It would only be a few more days until virtually every major sports league met the same fate of the many celebrities who’ve been exposed for their incredibly poor grasp of the definition of “consent” in recent years, and just a few more days after that spate of cancelations, I could no longer go to a bar even if I wanted to (which I decidedly did not at that point), as every non-essential business in New York City became a casualty of the ever-growing crisis.

This may lead to some people concluding I have more of a problem than I tell myself I do, but after spending the past five years living in the same neighborhood, this development was harder to deal with than I ever would have anticipated. Sure, there were no tanks crashing into bars or fires of unknown origin engulfing them in flames, but it was sort of like Waco in the sense that this community I’d become ingrained in had almost disappeared overnight.

A lot of these bars served as my home away from home. Whether I felt like spending more than I probably should on a fancy cocktail, increasing my collection of Untappd badges with some craft brews, or just grabbing a cheap beer and a shot of well whiskey, I had a spot for whatever spirit I was in the mood for whenever the spirit moved me. I know that thinking a bartender is your friend is like convincing yourself a stripper likes you, but I honestly believe I have a genuine connection to the many people I’m on a first-name basis with who’ve been providing me with drinks over the years.

At first, some places did what they could to adjust and I made a concerted effort to support the ones offering drinks to go (one bar served up premixed cocktails in a plastic container normally reserved for wonton soup) and those who took advantage of a bittersweet opportunity to give the people what they’ve always wanted by offering to deliver booze along with any food you order for takeout.

However, those strategies could only do so much to make up for one of the worst realities of our new reality, which was knowing that many of the people who staffed my favorite watering holes were suddenly out of a job. I donated to a couple of GoFundMes and took advantage of a website that allows you to virtually tip impacted workers in the surface industry, but at the end of the day, nothing I could do could provide me with the chance to drop $14 on a Manhattan, which is something I never thought I would miss until now.

To use “minimal” to describe the extent of my interactions with the outside world over the past couple of months wouldn’t even come close to describing the frequency with which I’ve wandered from the safety of my apartment and I would politely decline to answer if asked about what percentage of those few excursions were made to replenish the supply of alcohol I’ve consumed on my couch in lieu of the barstool I’d prefer to be sitting on.

Despite my routine attempts to get my dog to understand the gravity of a situation that’s largely resulted in her having to chill in my backyard to get some fresh air as opposed to the walks she’s accustomed to, it appears she’s still having trouble processing things. I’m not sure if taking a dump on the carpet on two consecutive nights a couple of weeks ago was a conscious form of protest, but regardless of her motivations, I decided we could both use a brief break from isolation and subsequently took to the streets on a recent Saturday afternoon.

I was slightly disheartened to see the number of pedestrians who seem to think holding a mask in your hand is just as effective as wearing one and others who appeared to be under the impression that you don’t use your nose and mouth to breathe but rather the part of their neck they were covering, but overall, I was pleasantly surprised at how many people seemed to be taking the proper precautions.

However, the truly pleasant surprise came as I made my way past some of my old haunts only to unexpectedly see more than a few of them with chalkboard signs out on the sidewalk. These are traditionally reserved for phrases like “Alcohol Might Not Solve Your Problems But Neither Will Water,” but instead, they were being used to advertise drinks to go served through a window of the bar or from a station set up toward the front of it complete with sanitized pens to sign your receipt with.

Now, when considering the balance that’s been struck between the upsides and downsides of this crisis, I think Colin Farrell’s seesaw metaphor from In Bruges concerning how much the cons outweigh the pros is as spot-on as it is impressively politically incorrect.

As I mentioned, the game was totally changed when restaurants started to let you add a margarita to complement your order of chips and guac and the chimichangas you’ve been using to accumulate mass just like Mac in It’s Always Sunny. However, this was an arguably more intriguing development, as we now live in a world where you can walk away from a bar holding a pint of tequila-spiked goodness in a plastic cup accompanied by a straw capable of making any passerby assume you’re sipping a limeade to stay refreshed on a warm spring day.

Upon returning home: I realized I may have stumbled onto an idea that could come in handy right now: socially-distanced bar crawls.

I know I’m in a somewhat unique position, as not everyone lives somewhere with sidewalks lined with places that aren’t technically soliciting business by enticing customers to grab a drink to stay refreshed over the course of their travels but also don’t have any signage to remind them about the open container laws they may be violating by sipping them while walking around in public.

If you are, however, in a place where you have the same opportunity, I would like you to imagine me reaching out from the screen you’re reading this on and gripping you firmly when you get to these next two words: cherish it.

There’s no telling when the world will return to a state we at least kind of recognize, but last weekend, I got a brief taste of the old days when I spent a couple of hours wandering outside accompanied by the various libations I grabbed along the way, downing double IPAs through a straw and sipping an old fashioned from one of the iconic blue cups usually reserved for shitty coffee purchased from a cart on a sidewalk corner.

Now, there are obviously a few hoops you have to jump through in order to safely partake in this altered version of the hallowed tradition loved by Guy Fieri fanatics, adult intramural teams, and the hordes of binge-drinking enthusiasts in Santa Claus suits that terrorize cities around the world every December.

The primary issue here, of course, is that meeting up with some friends to hop from place to place for a few hours doesn’t come close to being burdened with the social stigma that doing the same thing by yourself does. Sadly, you’re not doing yourself any major favors by linking up with a few buddies you haven’t seen in person in far too long and holding a mobile Zoom meeting while staying six feet away from each other isn’t exactly the most desirable alternative.

However, there’s a pretty good chance you’ve recently put a solid dent in the 10,000 hours Malcolm Gladwell would say you’d need to spend drinking by yourself in order to become an expert on the subject. Sure, this might not be a traditional bar crawl, but we currently live in an untraditional world that requires making sacrifices at every turn. You’re still not going to be able to crack some cold ones with the boys but at least you can get a change of scenery while crushing some by yourself.

Another logistical snag comes in the form of the masks anyone who isn’t a self-centered asshat should be wearing while in public, as it appears sellers masquerading as “creative types” on Etsy lack the ingenuity required to figure out a way to design one that allows you to simultaneously consume an adult beverage while not putting other people at risk.

The only real solution to this issue is to be aware of your surroundings. If you don’t have the luxury of strolling down largely-desolate side streets that provide you with the opportunity to pull a Future by taking your mask off for a bit, you’re going to have to have the common sense required to not serve as a potential risk to someone passing by you because you couldn’t resist the urge to wait a few seconds to imbibe.

It may not be as important as the other rules but there is one other requirement that’s almost as vital: tip your damn bartenders and tip them well. After seeing their livelihood put on the line in recent months, many of them are putting their health on the line in order to get by and supply us with some semblance of normalcy in the process. I wouldn’t ordinarily leave a $10 tip on a $25 tab but these circumstances are anything but ordinary.

If you can’t follow these guidelines, I ask that you kindly wait until the traditional bar crawls you’re accustomed to return to the realm of possibility. At the end of the day, playing your part in helping people stay healthy is paramount, but if you feel like your mental health has been taking a toll, this isn’t the worst treatment option if my experience is any indication.