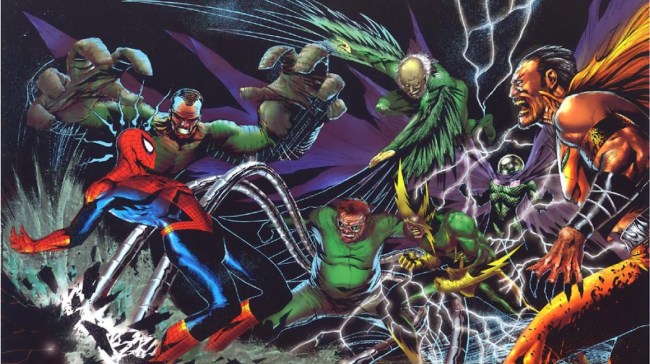 Y’all remember the last Spider-Man franchise? No, not the iconic Tobey Maguire one from the early 2000s, but the Andrew Garfield one from the 2010s? Yeah, that one.

However, if there’s one thing that The Amazing Spider-Man franchise did that was quite intriguing was the teasing of an eventual Sinister Six film.

At the end of The Amazing Spider-Man 2, after Spidey defeats Electro, Rhino, and Harry Osborn’s Green Goblin, Obsorn gets sent to Ravencroft Institute, which is more or less Marvel’s version of Arkham Asylum.

While in Ravencroft, Osborn is visited by a mysterious man in a suit, whom he tells that “everything we need is at Oscorp.” The man in the hat then visits Oscorp, where fans are shown various pieces of iconic weaponry from Spider-Man lore: Doc Oc’s tentacles, Vulture’s wings, and Rhino’s armor.

Now, obviously, this was supposed to be leading towards the introduction of the Sinister Six, however, that plan never came to fruition following the deal between Sony and Marvel to share the character.

But, with the success of Venom, Spider-Man now having the ability to hop between the two franchises thanks to a renewed deal that the two studios stuck last summer, AND Michael Keaton’s Vulture popping up in the Morbius trailer recent rumors seem to indicate that Sony is now, once again, moving forward with a Sinister Six project.

This comes following the reveal that Morbius is set within the MCU, featuring references to Far From Home’s ending whilst also bringing Michael Keaton’s Vulture back onto the big screen.

Sony had originally planned for a Sinister Six film in The Amazing Spider-Man universe which was heavily teased in the second film, but this fell flat when Garfield’s iteration was rebooted. [via FandomWire]

With the characters currently on this roster, fans have speculated that Sony’s Sinister Six will consist of Vulture, Shocker, Scorpion, Mysterio, Morbius, and Venom.

Who all get gadgets from the Tinkerer?

Given that Sony seems intent on fleshing out their own mini-Spider-Man universe — Venom, Morbius, and Venom 2, so far — a Sinister Six film seems to be a likely next step in that process.