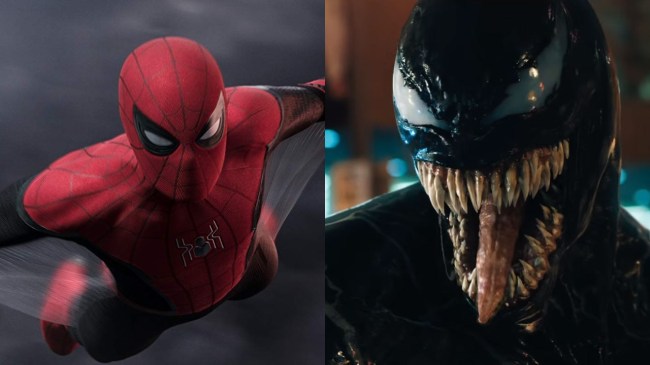 No offense to Sony, but… I just love dunking on Sony. Ever since they got hacked by Sony and tried to steal Spider-Man away from the Marvel Cinematic Universe, I’ve taken it upon myself to personally bully this globally-known multi-billion-dollar-worth rinky-dink junior varsity movie studio.

Despite my extensive attempts to discredit them, though, Sony keeps chugging along, as Venom — which was objectively average — grossed over $850 million at the global box office, which is about $200 million more than Justice League — a movie with Batman, Superman, and Wonder Woman — made, and that in and of itself is a massive accomplishment, so all the credit to them.

Still, despite Venom‘s relative success, I’m still not quite in on their recently-officially-named Spider-Man universe, which was supposed to continue in July with the also wildly-average-looking Jared Leto-starring (fuck that guy) Morbius, which was then set to be followed by the release of Venom: Let There Be Carnage (another laughable name) in October. Obviously, given our current global situation, both of those release dates have been pushed back.

But back to the point of this article: Sony quietly giving their branch of Spider-Man movies an awful official name. You ready? Drum roll please… introducing… Sony’s Spider-Man Universe of Characters. Good lord, not to overreact or anything, but that’s biblically awful. Take it out behind the shed and end it already. NO ONE IS ASKING FOR THIS.

Join Spider-Man and all his friends while you swing through all the films from the Spider-Man Universe of Characters! Complete your #SpiderMan movie collection with this limited-time @PrimeVideo offer!https://t.co/a1HqdrDYra pic.twitter.com/UiBkMItcV6

RELATED: The ‘Venom’ Sequel Has Such A Ridiculous Name That I Simply Must Respect The Franchise’s Commitment To Preposterousness