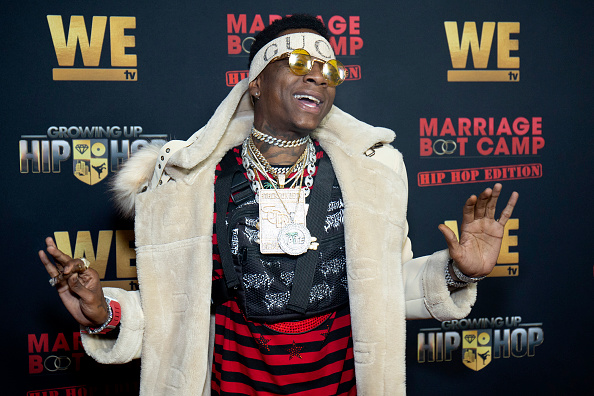 In Soulja Boy’s eyes he’s the most influential hip-hop artist out there bar none.

Today, the “Crank That” rapper went on the Breakfast Club morning show and went blasted both Kanye and Drake for being mentioned in the breath as him.

Here’s Soulja Boy on being compared to Drake who he feels copied his whole style.

Drake?! Drake?! The n***** that got bodied by Pusha T. The n**** that’s hiding his kid from the world, but the world won’t hide from the kid. Aubrey Graham in the wheelchair? Drake?! Y’all n****s better stop playing with me in here. Y’all talking about the light-skinned n**** from “Degenerous”? Stop playing with me like I didn’t teach Drake everything he know. You didn’t hear Drake on his first song – [singing] “Tell me what’s really going on. Drizzy Drake back in this thing. I’m ready. What’s happenin’?” That’s Soulja! That’s my bar! He copied my whole fucking flow! Word-for-word! Bar-for-bar! Don’t act like I didn’t make Drake. N****, don’t do that. I will son n****s in a heartbeat. Drake? Aubrey? The n**** who I made “N**** We Made It’ with in 2014?

Soulja Boy also went in on Kanye West for comparing himself to “Walt Disney”.

N****s talking about Kanye. N****, I’m that nigga. Kanye came in here talking about, “I’m Walt Disney”… N****, you ain’t none of that. Then why you ain’t come out with sh*t then. I came out with a whole video game console. I’m the first rapper to do that in history. You ain’t Walt Disney. You ain’t none of that. You kiss them folks’ ass at Louis Vuitton and you kissed them folks’ ass at Adidas, and you came out with two pairs of goofy ass tennis shoes.

You crying on Twitter every week about Drake. You gotta stop that sh*t. You look lame. You look cap. Real street n****s, young kids like me, and the generation looking at you like you goofy. You up here supporting Trump and sh*t. You supporting Trump? What the f*ck wrong with you? That sh*t not right. I done sat back long enough. I’m not holding my tongue no more. Kanye, call me. Get in tune with me ’cause if not, I’m gonna keep checking you. You need to stop supporting Trump. That’s cap. That’s not right. My folks went through too much sh*t for you to be out here doing this goofy sh*t… You gotta put on for the black community. You too famous, your voice too big. Don’t do that sh*t… You out here trolling, doing songs with 6ix9ine. Y’all getting shot at. That’s why, ’cause you doing all this goofy sh*t… You none of that sh*t you claim to be until you show me. Only thing you did was come up with a pair of tennis shoes and them sh*ts ugly and they cost too much… All that Yeezy clothes, that sh*t ugly.

Soulja Boy is a legend

Soulja Boy may be crazy as shit, but he definitely paved the way for a lot of rappers in the current hip hop landscape. Effective social media marketing and viral dances were relatively uncharted territories in hip hop until Soulja came along.