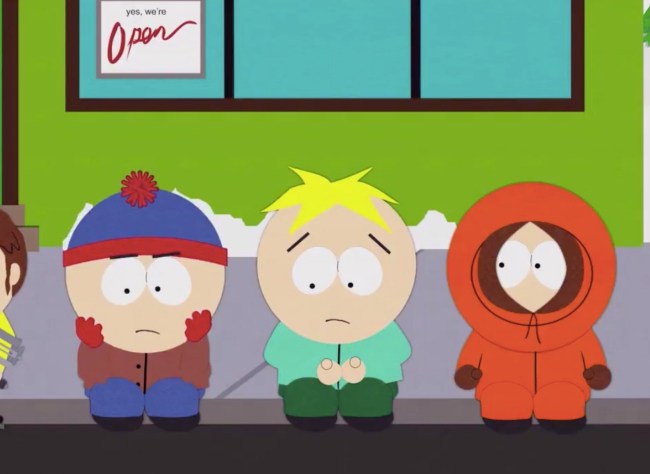 Trey Parker and Matt Stone’s South Park is no stranger to rustling jimmies. They’ve pissed off everyone from PETA to Goths, and crazy-ass Scientologists to Big Tobacco.

For their latest episode, ‘Band in China’, the South Park creators appear to have reeaaaaaally touched a nerve with the Chinese government because they’ve got and gotten themselves banned from the entire Internet in China. The episode itself was extremely critical of the Chinese government’s stranglehold on their heavily censored Internet and ‘Band in China’ appears to have been all they needed to flip the proverbial switch and make sure South Park ceases to exist anywhere in China.

The country’s internet censors have removed any tweet, fan page, or mention of South Park anywhere on the Chinese internet. Obviously, this includes anywhere fans were previously able to stream the show. The South Park creators were quick to respond (below).

The Hollywood Reporter was first to report this bizarre news:

A cursory perusal through China’s highly regulated Internet landscape shows the show conspicuously absent everywhere it recently had a presence. A search of the Twitter-like social media service Weibo turns up not a single mention of South Park among the billions of past posts. On streaming service Youku, owned by Internet giant Alibaba, all links to clips, episodes and even full seasons of the show are now dead.

And on Baidu’s Tieba, China’s largest online discussions platform, the threads and sub-threads related to South Park are nonfunctional. If users manually type in the URL for what was formerly the South Park thread, a message appears saying that, “According to the relevant law and regulation, this section is temporarily not open.”

The draconian response is par for the course for China’s authoritarian government, which has even been known to aggressively censor Winnie the Pooh, because some local Internet users had affectionately taken to comparing Chinese president Xi Jinping to the character. (via)

Imagine being such a sensitive wet blanket that you would censor Winnie the Pooh because people compared you to the lovable character.

The creators of South Park were quick to respond to the news that they’d been completely scrubbed from the Internet in China as if they’d never even existed. They released a statement on Twitter which reads:

“Like the NBA, we welcome the Chinese censors into our homes and into our hearts,” the statement reads. “We too love money more than freedom and democracy. Xi doesn’t look like Winnie the Poo at all. Tune into our 300th episode the Wednesday at 10 p.m. Long live the great Communist Party of China. May the autumn’s sorghum harvest be bountiful. We good now China?”

The Houston Rockets GM + NBA are currently embroiled in a battle of words against China after GM Daryl Morey’s tweet expressing support for the protestors in Hong Kong and it’s already escalated to the point of Chinese authorities canceling a D-league exhibition and several Chinese businesses severing ties with the Houston Rockets.

If you haven’t seen ‘Band in China’ yet you 100% need to get on that. It has concurrent Chinese-centric plotlines, one where Randy Marsh tries to sell weed and ends up in a Chinese work camp as his prison punishment.

You gotta lower your ideals of freedom if you wanna suck on the warm teat of China. #southpark23

Kyle returns to South Park and gives Stan a great idea, but the boys realize they can't betray their ideals. Watch the all-new episode, “Band In China” for FREE – https://t.co/oktKSJvjxS #southpark23 #fingerbang pic.twitter.com/Bq5K6gWjOV

The NBA’s already tucked tail and apologized which gave the South Park creators the perfect window to take a jab at them as well as China. I’d be SHOCKED if there isn’t a South Park episode about this within the next month.

For more on this story, you can click here to visit THR